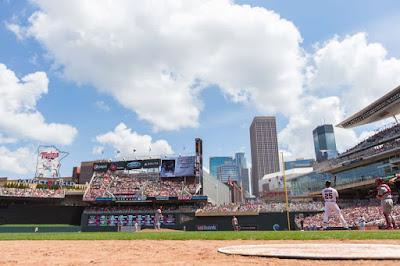 Following his first and only start in a Major League Baseball uniform, the Twins couldn't even wait through the night to option prospect Alex Meyer back to Triple-A Rochester. Getting a chance with Ervin Santana and Kyle Gibson on the shelf, the Twins had deemed they had seen enough after just 2.2 innings pitched from Meyer. Really though, it seems there's a much large issue at play here.

This morning on Twitter I was thinking back to the guys I can remember the Twins using in an extremely poor fashion. The list is probably longer than I was able to recall, but here's what I came up with:

The reality of the situation is that every single one of the names mentioned has been done a disservice by either Paul Molitor, Terry Ryan, or a collection of the two. I touched on odd roster moves when writing up Ryan a while back, but I think it's probably fair to look a little deeper.

I won't spend much time on Tonkin or Vargas as I've talked about the poor usage they had to endure previously. Tonkin was jerked back and forth between the big leagues and Triple-A in 2015. Despite being a good piece for Minnesota this season, it's something they should have previously been aware of. You can read that piece here.

Vargas is a guy that's never been someone I have regarded as in the higher level of prospects. It was nice that he made a showing at the 2014 Future's Game, but that may go down to be the highlight of his career. Regardless of my feelings that he may be a bench bat, Minnesota sent him packing at such a poor time, and it's essentially ruined him. Read more of my thoughts on that here.

That brings us to the guys that Ryan and Molitor have hurt this season. The list starts with Max Kepler. He was up with the Twins for roughly 20 games in 2016 to start the year, and in that time, drew just two starts. Kepler was employed almost solely as a defensive replacement, and was given just 14 plate appearances. For a guy that's regarded pretty highly across MLB in the prospect realm, his development was being stunted, while his ability at the highest level was not at all being understood.

Kepler could have been drawing regular, rotating starts among the Twins outfield. A guy that can play all three positions, he should have been in the lineup at least two times per week. Instead, he was sent back to Triple-A after having been able to show nothing. He's now hitting below the Mendoza Line at Rochester, and is trying to get things going after having the first bit of his season be rendered completely useless.

Of the group, Polanco has probably been the least damaged, despite being a victim previously. He has been called up and sent back now by the Twins twice in 2016. The latest time, April 26, saw him get a single at bat (on April 29) before being sent back to Triple-A. Minnesota has promoted Polanco multiple times over the past three seasons, and yet he's been given a whopping 29 at bats. He's going to be out of options at the end of 2016, and despite being touted to have a big league ready bat, Minnesota really hasn't allowed him an opportunity to showcase it.

I've contended for quite some time that Polanco's greatest asset to the Twins is in his trade value. He can't play short or third efficiently enough, and Minnesota has Brian Dozier at second for the immediate future. The way in which Polanco has been showcased isn't going to drive up his trade value, and it's becoming closer to the time that the Twins lose him for next to nothing.

Now for the most recent example, and maybe the most frustrating one, Alex Meyer. Meyer was acquired for Denard Span from the Washington Nationals prior to the 2013 season. Now 26 years old, Meyer has both started and relieved in the Twins system. Having been a part of the organization for multiple years, it's somewhat sad the club hasn't decided on which is the best route for him to succeed.

In being called up to the big leagues this time, Meyer was given a deck stacked against him, and then was immediately jettisoned to the farm in favor of a reliever with an ERA north of 10.00. Here's the timeline the Twins gave Meyer in 2016:

Instead of scrapping the starting idea, and allowing him to see if he can stick in the pen for a team that's 8-19, Minnesota abandoned him altogether. Meyer goes back to Rochester where he'll likely start. Sure, he probably gets another crack at the big league level in 2016 in some fashion, but he's 26 and the organization still has no idea what the future holds for him.

At some point, the Twins need to understand that if you're going to build from within, you're going to be employing youth. With youth comes inexperience, and therefore you'll have some bumps in the road to work through. For a team that's 8-19, there's little reason to keep acting like you need the quick fix that is going to get you to the playoffs, it's not happening.

Looking to the future, this organization still has plenty of pieces to build a contended from within, and remain that way for a while. What I'm not sure they have is the right people at the top (Ryan and Molitor) to get them to that point.
Posted by tlschwerz at 7:43 AM