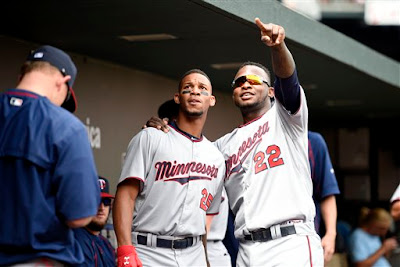 There were to pretty distinct narratives that were expected to play out for the Minnesota Twins over the course of the 2016 Major League Baseball season. Many in the area saw this group as a potential playoff contender, and it was expected that their young stars would begin to emerge. While the playoff picture has been erased, the transition towards youth may now be getting off of the ground.

After putting together an impressive rookie campaign, expectations for Miguel Sano in his sophomore season were through the roof. He was going to strike out a ton (and he has), but he was also going to push the envelope for home runs. Early results were indicative of a guy pressing a bit too hard, but of late, Sano seems to have found his stride.

Fresh off of a stretch in which he homered in four straight games, Sano became the first Twins player to reach double digits in longballs during the 2016 season. Sure, his .237 average through 25 games in May might be a tick lower than desired, but his .851 OPS more than makes up for it. Over the course of the season's second month, he's launched eight homers and contributed 15 runs batted in. Since hitting his first homer of 2016 on April 18, Sano has owned an .875 OPS and has paced the Twins in the power department.

While he continues to acclimate to right field, Sano has turned down the dial on the talk of him being out of position in right field. Sure, he's a defensive liability having been worth -8 defensive runs saved out in right. That mark however is better than Jay Bruce's -11 for the Reds, and nearly on par with sluggers J.D. Martinez (-7) and Jose Bautista (-5). In short, his power has done what should have been expected, in making his defensive game less of a narrative.

Through the first two months of the season, Sano has been worth just 0.8 fWAR, but as I pointed out a couple of weeks ago, that number is on the rise. His process suggests the results will come, and the recent stretch of power is indicative of that.

Recently being recalled from Rochester to replace an injured Danny Santana, this new look Buxton may be the second half of the tandem Sano needs. I outwardly wondered if Buxton's progress at AAA shows that he's turned the corner, and there's plenty of reason to believe he may have.

Down at Rochester this time around, Buxton went back to something the Twins asked him to move on from post being drafted into the organization, a leg kick. His timing has been an issue at the big league level, and while being fooled quite often, he struggled to get his hands to the ball and make contact while driving pitches.

Over the weekend, I checked in with a teammate of Buxton's and questioned about his progress. He told me, "He's playing with some much more confidence. He's on everything. When he gets out, it's because he just misses it. Whatever he changed is really working. We faced a guy a couple of days ago that was throwing 100 and Buck just smashed a ball up the middle like it was nothing." Coming from someone watching up close and personal, it's hard not to take that as more than just a grain of salt.

Buxton leaves Rochester in 2016 with a .336/.403/.603 slash line in 29 games. Over the last month, he's hit safely in all but four games (out of 23) and has slashed .375/.444/.682. His gap power has resulted in seven doubles and a triple, while he's also launched six homers in the month of May. What may be most promising is that Buxton has decreased his strikeout rate to just 20% of his plate appearances at AAA, as opposed to 49% at the big league level.

It's fair to immediately expect Buxton to be a defensive asset for the Twins, and among the best outfielders in all of major league baseball. If his bat travels north with him this time as it seems it may, he'll be ready to provide the two-headed monster that the Twins can ride throughout the rest of the season.

Sure, things haven't worked out the way in which the Twins would have wanted. Terry Ryan and Paul Molitor have both made some pretty significant mistakes. There's guys not performing, and really, the season is all but lost before the summer begins. That all being said, the transition of a youth takeover is something Minnesota has to be excited about, and June could definitely be ushering that in.
Posted by tlschwerz at 7:58 AM