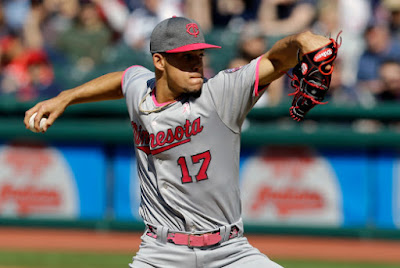 In his second start of the 2017 Major League Baseball season, Jose Berrios looked like some sort of well tested veteran for the Minnesota Twins. Not only was he taking on one of baseball's best teams in the Colorado Rockies, but he thoroughly and completely dominated them.

Sure, there was the 11 strikeouts. Yeah, he lasted into the 8th inning, working 7.2 IP. And economical, definitely, as he needed just 106 pitches to get that work in. More than the surface numbers though, Berrios' results were punctuated by some truly exceptional moments.

Over the course of his outing, he got 20 swinging strikes. To put that into context, he threw 72 strikes in total. That means 28% of the pitches he threw for strikes had Rockies batters swinging right through. Truly an incredible amount, it's not all that surprising given the movement on his pitches. There was the frisbee of a curveball that he tossed to Ian Desmond. The Rockies first basemen was quoted postgame suggesting that Berrios reminded him of the late Jose Fernandez on the mound.

It wasn't just the curveball that Berrios had working though, his fastball has some seriously incredible move. In this pitch to Raimel Tapia, that turned into a strike em' out, throw em' out double play, Berrios' fastball gets more movement than anything I've seen since Ubaldo Jimenez's magical season with Colorado. The ball starts on the edge of the plate, and Tapia literally has no chance as the ball casually darts away from his bat. 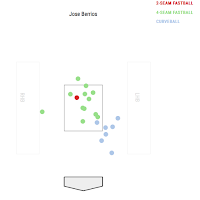 When looking at what it was that cause Rockies hitters to swing and miss, Berrios didn't discriminate. He was generating whiffs on three of his four pitches (excluding his changeup) and the curveball consistently was getting batters to chase way out of the zone.

That bender is something Berrios is obviously confident in as well. He threw it in a handful of different counts, and the 36 curveballs he tossed accounted for 34% of his total on the night. In fact, Berrios virtually operated with a two pitch mix. His fastball (which he does throw both a four and two seam) was used right around 50% of the time. That curve was really his only other offering, as he used his changeup on just six different occasions.

It's been a pretty incredible two start sample size, especially considering how his first 14 career starts went. While it's unfair to assume this level of dominance as the norm going forward, we've now seen why Berrios has had such a long hype train following him through the minor leagues. He should safely settle in as a third starter for the Twins, and he has the ability and drive to push the envelope. 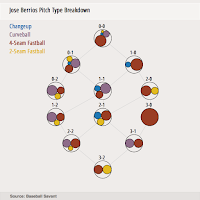 As he continues to take the ball every 5th day, the keys to focus in on will remain pitch economy as well as just how impressive the movement he gets on his pitches is. Short in stature, it is in that movement that hitters are deceived, and that will help to allow Berrios opportunity to stay ahead of opposing batters. The pitch plane isn't ever going to work in his favor, but when his ball darts the distance of the zone, even the best big leaguers are going to struggle.

May 18, 2017 was among the best starting pitching efforts ever recorded in a Twins uniform. For an organization void of strikeouts for so long, it appears Berrios will pile them up in bunches. If he's going to continue bringing a frisbee to the ballpark, this should be a lot of fun.
Posted by tlschwerz at 8:45 AM