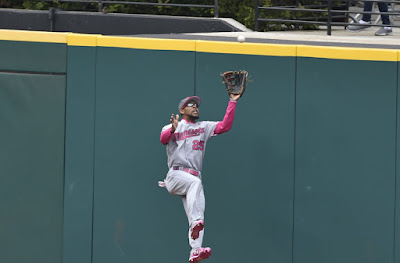 There's no getting around how bad Byron Buxton was to start off the 2017 Major League Baseball season. Through his first 15 games, he was batting under .100 and owns a 24/2 strikeout to walk ratio. If there was a doomsday scenario, this was it. Given the setback that cause, it's overshadowed just how good he's been of late though, and it's probably better than you'd think.

Since April 21, Buxton has played in 25 games for the Twins. He has had 86 plate appearances and compiled 73 at bats. They've come together to produce a .260/.365/.384 slash line, complete with four extra base hits, and a 23/12 K/BB ratio. For a prospect with otherworldly expectations, that may not seem glamorous, but it is, and he's not done yet.

Despite having the speed of a prototypical leadoff hitter, I'm not sure Buxton's on base skills will ever translate to hitting out of that lineup position. He's going to hit for more power than his wiry frame may suggest, and batting out of the three hole, as Paul Molitor started him at in 2017, may be a more realistic long-term prognosis. That gives us reason to believe the slugging numbers should go up, further bolstering his OPS production.

While scuffling early on, Buxton had a chase rate of 38.3% and swung through 201.% of pitches. Guessing and rolling over plenty, Buxton made hard contact just 24% of the time through his first 15 games. Since making adjustments over the last 25 games, the Twins centerfielder has dropped the chase rate to 27.8% while swinging through just 13.5% of pitches. The hard contact rate has actually slipped some (21.6%), but Buxton's BABIP is likely always going to be more reflective of his speed than his exit velocity.

You've been handed a few numbers to suggest why Buxton isn't done climbing the ladder yet, but now, it's important to contextualize where he is currently. The question as to what Minnesota needs from him offensively to continue to rely solely on defense, has come up more than a few times. If this latest sample size is any indication, the answer is really nothing. As the numbers indicate right now, this current level of production, has Buxton not only playing at a Gold Glove defensive caliber, but among the best outfielders in the big leagues from an all around standpoint.

Looking at his last 25 games, Buxton has compiled a .748 OPS. On the year, he has also contributed six DRS (defensive runs saved), which by the way, is second among MLB center fielders (thanks to the Rays having a good one in Kevin Kiermaier). Looking at those numbers, we are able to come up with a pretty focused group of big leaguers.

Among qualified hitters, there's just 41 outfielders in baseball with an OPS north of .750. There's also just eight outfielders with a DRS of six or more to this point. Combining those two pools, we see a crossover of just three players (outside of Buxton) that have both a .750+ OPS and have been worth at least six DRS in 2017. There names: Aaron Judge, Brett Gardner, and Mookie Betts. That's a trio of players that includes a Rookie of the Year front runner, a solid 10 year vet and one time All Star, and a one time All Star that happened to be last year's runner up in the MVP voting. Any way you cut it, that's a pretty strong group for Buxton to be included in.

Now, as with the 15 games before, a 25 game sample size is hardly anything to begin writing checks off of. What's noteworthy however, is it doesn't just appear to be a hot streak for Buxton, he's made fundamental changes. Having worked with James Rowson and heard from a few others, Buxton's swing is a tighter, more well oiled machine right now. He's got the confidence in the box to let the bat play, and that the ball will carry thanks to the process he's taken prior to contact.

At just 23 years old, Buxton also remains the youngest of that group of aforementioned dual threat talents. His defense is going to remain at an elite level for years to come, and the expectation that the offensive water level raises is a pretty solid one. Each jump the bat makes, will only elevate Buxton as a whole, and even at this early stage, it's easy to see why his ceiling is so high, and excitement level so real.

It's still early for him, but even while still coming into his own, Byron Buxton is among the best dual threat outfielders in all of major league baseball. Imagine what happens as his game continues to evolve.
Posted by tlschwerz at 8:47 AM