The Twins Blockbuster Yet To Come 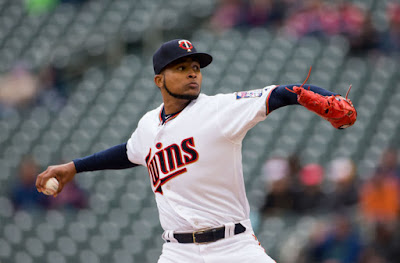 Over the offseason, there was no such thing as Twins talk that didn't include the discussion surrounding Brian Dozier. After launching 42 (43) homers, Minnesota was out for a king's ransom in return for their prized second basemen. When the Dodgers eventually bowed out in favor of Logan Forsythe, Minnesota took their toys and went home. It's worth wondering though, is Dozier even the most valuable trade chip that Derek Falvey and Thad Levine possess?

He's not a true number one starter by any means, but the Twins ace Ervin Santana has gotten off to a blistering pace in 2017. He currently owns a big league leading 0.66 ERA. He's 5-0 through six starts, and has already tallied a complete game shutout. His 0.707 WHIP is nearly half of his career 1.268 mark and both his K/9 and BB/9 fall right in line with his career averages.

Now, you'd be silly to extrapolate a six start sample size to the duration of the season. However, for a starting pitcher, six games equates to roughly 20% of the expected workload. While it's still just the beginning, it's a more significant piece of the puzzle than anything a hitter has compiled through one month of meaningful action.

I wrote about Santana a bit ago, and that this season isn't all that out of nowhere for him. Of course predicting him to be this good is a stretch, but the reality is that he's been good for a while, and a few small tweaks, along with good defense has helped him immensely. Santana owns a 2.98 FIP to date, nearly a full run better than at any other point in his career. He's also generated more weak contact than any starting pitcher not named Andrew Triggs.

This sample size can be extended back even a bit further as well. Dating back to July 2016, Santana has posted a 1.93 ERA along with a 3.22 FIP. Opposing hitters have batted just .184 off of him in those 22 starts, and his WHIP rests at 0.95. Behind him, he's had an outfield composed mainly of Eddie Rosario, Byron Buxton, and Max Kepler. If and when he's allowing contact to the grass, it's generally falling into leather.

Attempting to put some sort of a bow on it, Santana has elevated himself slightly, and has also enjoyed some very strong defense behind him. He's been the Twins ace, and among the best pitcher's in the game. It's really not a small sample size at this point, and you can bet other teams are taking notice.

So with those other teams, the Twins could find themselves in the driver's seat. Last offseason, Minnesota was tasked with attempting to get fair value for a second basemen that hit 14 more homers than his previous career best, and posted an OPS over .100 points north of the season before. Brian Dozier was, and remains, a regression candidate in every sense of the word. That's not to sell Dozier short, even at a .760 OPS and 25 home run total, he's a very nice big leaguer, the problem is the market has a good deal of those.

Arguably moreso now than at any point in recent memory, the second base position in the big leagues is stacked. From Altuve to Cano, and Kinsler to Murphy, there's at least 10 (or one-third) legitimate star two baggers. With that being the reality, the position remains both a luxury, and one that many top teams have accounted for.

When talking to the Dodgers, Minnesota targeted Jose De Leon in exchange for Dozier. They also asked for names like Cody Bellinger and Walker Buehler, neither of whom could've ever been had even straight up. De Leon entered 2017 averaging somewhere around the 30th best prospect, and he's yet to pitch this season after dealing with injury troubles. Minnesota was wise to want more for a player that means so much to their franchise, but getting a fair return for Dozier is likely always going to be an uphill battle.

That leads us to this; what if Ervin Santana is actually the more valuable piece? Pitching is always going to be at a premium, and Santana comes controllable at $27.m over the next two seasons. For a guy that's been anywhere close to what he's produced, that's larceny. On the flip side, Dozier's team control ends after next season, and he's due for a raise well above the $9m he's slated to make.

If the Twins can continue to hover around .500, it probably makes more sense for them to hold onto everything, make a splash in the offseason, and go for it in 2018 and beyond. If they don't see that window ready to break open however, it very well could be Santana that restocks the farm, and that wasn't likely the case even a few months ago.
Posted by tlschwerz at 11:46 AM