What If The Twins Buy? 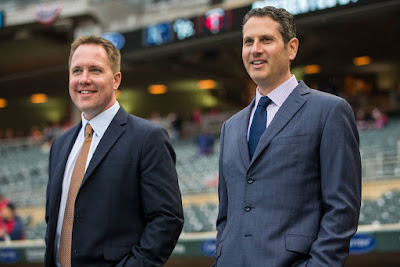 Earlier this month, I wrote about why I believe the Minnesota Twins must trade Ervin Santana. Sure, regardless of his 2017 output, he's not some reinvented pitcher that's going to command a teams top prospects. However, he's more valuable long term to the Twins if the organization can flip him for some solid pieces. What's worth wondering though, is if Minnesota's winning ways have the organization positioned to be buyer's this summer.

Conventional wisdom suggests that the Twins current level of play isn't going to be sustainable, or at least result in a playoff berth. If the club is still in the thick of things this summer though, an argument could be made to buy with an eye on the future. Rather than mortgaging your upcoming window for instant gratification, Derek Falvey and Thad Levine could add some pieces to help in 2017 and beyond.

Looking at the current construction of both the 25 and 40 man roster, the biggest deficiency remains on the mound. Minnesota is starved for starting pitching depth, and the bullpen is a pieced together hodgepodge. The Twins could take on some arms, with the intention of retaining them for 2018 and beyond, and feel much better about whatever they must give up.

So, who are some candidates in this scenario? Let's take a look:

Gray is a name that I believe the former regime had some interest in. He was pretty awful a season ago, and then he got hurt. Through five turns in the rotation this season however, Gray has been an asset for the Athletics, and has posted the best K/9 (8.5) and BB/9 (2.4) numbers of his career. When right, he can be counted on for 200 innings, and his strikeout numbers would be a lift to a Minnesota rotation void of them. At 27, he's not a free agent until 2020, meaning Minnesota would have to part with some decent pieces. I'm not certain he's a one, or even a two starter, but he'd help in Minnesota to be sure.

There's little denying that Los Angeles may have the worst farm system in all of baseball, and they don't have much at the big league level either. The Angels should be trying to pair Mike Trout with talent in his prime, and dealing a 30 year old like Shoemaker could help. He's not a top tier starter by any means, but a career 3.82 ERA would fit for the Twins. He's a middle-of-the-road strikeout guy (Much like Gray), and he doesn't issue many free passes (2.1 career BB/9). He's 30 now, and isn't a free agent until 2021. Again, Minnesota would need to return assets, but that's a controllable pitcher you'd be happy with.

This is a tricky situation, as I'm not really sure what to believe Nova is. He's been nothing short of spectacular since arriving in Pittsburgh, but this season, he hasn't struck anyone (4.8 K/9) out and has limited damage by not walking anyone (0.6 BB/9). He's on an incredibly affordable deal making just $26m through 2019. The Pirates may be inclined to deal Gerrit Cole, who has significantly more upside, but he's going to command quite a haul. If Nova could be had for a modest price, he's a middle-of-the-rotation option that the Twins could key in on.

The lone rental of this foursome, Darvish is a name I think makes a lot of sense for Minnesota, the question is when. If the Twins deal during the season, they'd need the Rangers to fall back out of contention. There's obviously history there with Thad Levine, and Darvish being a free agent in 2018, he's a name I hope Minnesota seriously pursues. Darvish is a true ace, and the Twins have money to spend this offseason. He's a strikeout machine, and he's responded well (3.23 ERA 10.8 K/9 3.2 BB/9) since undergoing Tommy John surgery and missing 2015. Darvish would be a great feature atop the Twins rotation, and at just 30 years old, he's a guy they could ink to one more, big, long-term deal.

I'm still not convinced, even with a winning record, that the Twins should be looking at adding significant pieces in season. Nova is really the only name mentioned above that shouldn't command at least one strong prospect. However, if Minnesota is going to make the move with a long term focus, there's reasons to argue for it. Over the winter, there's plenty of different names that could be on the Twins radar. The club could also consider someone like the Giants Johnny Cueto, depending upon how he chooses to navigate his contract and opt out scenario.

At the end of the day, no winning in 2017 should deter the focus from 2018 being a true window. This club has money to spend, and bringing in a couple of top tier arms is something that could set them over the top. Dealing for them hurts the farm, but if you bring in somewhat of a sure thing that will help you down the road and make the end of the season interesting, so be it.
Posted by tlschwerz at 7:53 AM