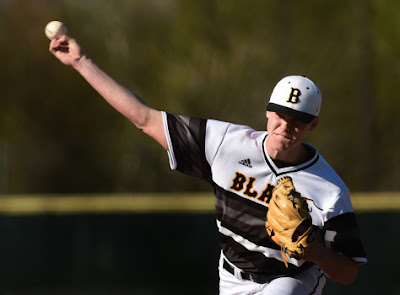 Right now, Sam Carlson is a senior at Burnsville High School. In a matter of a couple weeks, he'll very likely be able to call himself a professional baseball player. On top of being tabbed as a first round pick in the upcoming Major League Baseball draft, Carlson is expected to be the first prep pitcher ever taken that high from the state of Minnesota. That level of hype comes with big shoes to fill, but Carlson appears ready.

I had the privilege of speaking with Carlson as his final high school season winds down. He's done pitching in the regular season for Burnsville, but obviously has postseason aspirations. With a busy next few weeks ahead, he'll have plenty on his plate, but if there's someone that can take it all in stride, it appears to be him. Covering a handful of different baseball related topics, here's how our discussion went.

Off The Baggy: Starting off with your senior season at Burnsville, how much has felt like a whirlwind? You've had a great season, managed school, and have had a large audience each time you've taken the mound.

Sam Carlson: My senior season has been one to remember. Our playoffs begin soon and we are looking to make a run. It is my last time playing with some of my friends who I have played with since I was 10 years old. Between balancing school, baseball and my personal life, it hasn't been too bad. I have really enjoyed it and wouldn't change it for anything.

OTB: Looking ahead to college, I know you've committed to Florida. What drew you to the SEC and ultimately landed you with the Gators?
SC: I wanted to play for the Florida Gators since I was a kid. For one reason or another, it was my dream school. After seeing Logan Shore go there, who played for the same club team I did growing up, gave me hope that I could do the same one day. After going through the recruiting process and taking my visits I felt like it was the best fit for me, with an outstanding baseball program, great academics and intriguing weather for a Minnesotan. Everything seemed to fall in place for me and I knew I made the right decision committing to Florida.

OTB: Obviously the MLB Draft has to come up. Have you thought at all about being the first ever 1st round prep pitcher from Minnesota? What would that mean to you?
SC: It has been pretty cool to see stuff like that. Whatever happens I want to represent Minnesota the best I can and prove to people around the country that we have talent up here, it is just sometimes overlooked. I want to make people from our state proud with whatever the next step I take is.

OTB: When looking at the next level, college or pro, what separates you? What do you think puts you in the best position to compete and excel?

SC: What I think separates me at the next level is my ability to pitch. I am able to use my change-up in a way that a lot of players don't figure out for a long time. I also think that my maturity and self control on the mound gives me an advantage at the next level.

OTB: A lot is always going to be made about velocity on the mound, but tell me about your pitch offerings and your style in attacking opposing hitters?
SC: I have a three pitch mix with my fastball, slider and change-up. I am able to throw all three pitches for strikes especially when I am down in the count. My style is not to blow it by hitters, but rather to learn from them throughout the game and pitch to them in an effective way. I think my secondary offerings are pitches that are above average which leads to my unique style of pitching.

OTB: How has the draft process been for you? Have you enjoyed the extra attention, or has it been something you've used to motivate yourself and just continue to go about your game?

SC: The draft process has been fun for me. When I am between the lines I don't worry about anything going on in the stands. It is very motivating seeing all of my hard work pay off, but in the end it just motivates me even more. Hopefully this is just the beginning.

It indeed feels like this is just the beginning for Sam. Whatever path he chooses, there's sure to be plenty of success ahead. Likely with the Twins out of the picture, Carlson will create fans for a new organization from all over the state. He has the chops to pitch in the big leagues one day, and he's well on his way there.
Posted by tlschwerz at 7:15 AM