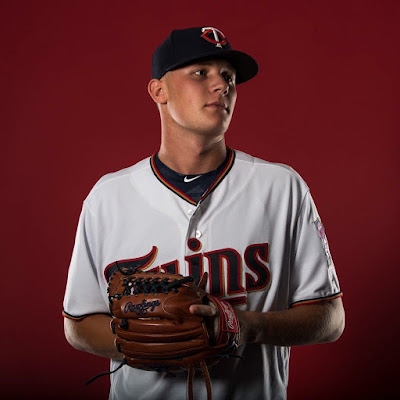 As the Minnesota Twins closed out the first day of their 2017 Major League Baseball, some heads were left scratching. There was talk of below slot deals and pool money being saved. It came full circle at pick 76 however, when the organization was able to grab (and ultimately sign) high school hurler Blayne Enlow.

Committed to LSU, Enlow decided the over-slot deal (reportedly $2 million) would be enticing enough to take his talents to the pro ranks. Highly regarded as a prep pitcher, Enlow was said to have the best curveball in the entirety of the 2017 draft. Minnesota gets a kid that could end up being a rotation stalwart a few years from now, and the Louisiana native begins his journey to the ultimate dream.

I caught up with Enlow to talk the draft, and his game. Here's what he had to say:

Off The Baggy: Going into the draft, you were among the top prep arms in the nation. What was your draft day experience like? Did you have any idea where you may go?

Blayne Enlow: I had no idea where I would go. I was waiting for the best offer I could get and the first day nobody got to my number so I turned down a few offers, and then the second day the Twins came up to two million and I knew that's what I wanted to do so I took it!!
OTB: The Twins ended up taking you 76th overall knowing they got a first round talent. When did you start hearing from them and thinking that may actually be where you land?


BE: I was on a golf course with a couple of my buddies and then I got a call from my agent saying the Twins are putting 2 ($2 million) on the table and I agreed.

OTB: Velocity is what gets noted first, but MLB.com called your curveball the best in the draft. What does your repertoire consist of, and how do you like to attack hitters?

BE: I like to pound the strike zone and get batters out quick and my finisher is my curveball. I can throw it first pitch for strike too, and I would say it's my best pitch.

OTB: Making the jump to pro ball from high school, what do you feel like may be the biggest challenge? What sets you apart?

BE: The biggest challenge will probably be being away from home and meeting the new players, but what sets me apart is that I will work harder then anyone on the field and I always give it my all.

OTB: When looking at your pitching style, is there a big leaguer, past or present, that you emulate or look to build yourself off of?

BE: I would say Jacob deGrom would be who I feed off the most. I see a lot of the same mechanics and same pitch work.


OTB: Prior to the draft, what did you know of the Twins organization? Have you been to MN or Target Field previously?

BE: I've actually never been, and to be honest, I never knew much being Louisiana grown.

OTB: What's the one thing you want Twins fans to make sure they know about Blayne Enlow?

BE: That when I make it I will give it my all for the city and I will continue to work harder than everyone to try to be the best Blayne Enlow I can be!
For an organization that is always looking for pitching help, Enlow sure seems like he can give the Twins that lift. He'll be a name to watch for years to come, and one that Twins fans will hope to cheer on at Target Field in the future.