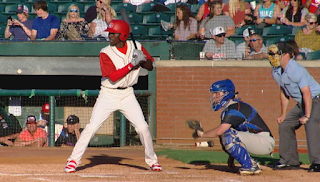 Way back in October 2016, I ranked the Twins Top 15 prospects (found here). While there wasn't a number one prospect in all of baseball like Byron Buxton, there's still a lot to like in the organization from top to bottom. Now with the 2017 Major League Baseball draft behind us, and the minor league slate half over, it's time to reassess the group as a whole.

Going from 15 to 1, the group has seen some movement, and there's been some really strong performances thus far in 2017. We could see a few of these names graduate from the group yet this year, and the Twins could find help internally from the farm. With that said, here we go:

Garver just missed out on this list prior to 2017, but has continued to command attention. I opined there was some steam to him making the club out of spring training, and he's probably next in line behind John Ryan Murphy. Garver owns an .808 OPS at Triple-A Rochester in 40 G this season, and has some positional flexibility being able to play 1B as well. He has strong caught stealing numbers, and can defend behind the plate at an above average level. There's reason to believe that Garver should finish the season in Minnesota.

For a time Palka looked like he could push for an early promotion to the big leagues in 2017. His production dipped a bit, and now he's on the DL with a .768 OPS. Power is always going to be his calling card, and he was off to a nice start with eight homers through his first 41 games. The strikeout numbers are only going to rise at the big league level, so he'll have to do more work to draw a consistent amount of walks.

Getting back on the mound after missing the past two seasons, Thorpe has picked up where he left off. Through his first four starts at Fort Myers, he owns a 2.12 ERA and a 12.7 K/9 to go with a 2.6 BB/9. He looked good at Cedar Rapids prior to his Tommy John surgery, and it seems he's rebounded well. The Twins will no doubt have the 21 year old on an innings limit (and he's never thrown more than 71.2 IP in a season), so he'll likely end 2017 at High-A.

Had he stayed healthy out of the gate, Reed would probably be with the Twins already. He suffered an injury on the final day of spring training, and lost a few months of work. Now back healthy, he made quick work of a brief return to Double-A and is back at Triple-A Rochester. Reed has an electric fastball, and solid movement on his pitches. He's a big league reliever with the ability to move towards the back end of the bullpen.

Yet to play in 2017, Javier is likely destined for the GCL. He missed a good amount of time in the Dominican Summer League last year, but remains an incredible physical specimen. Watching him in Fort Myers this spring, I have doubts as to whether he can stick at short simply because of his growth. He's bulked up a good amount, and the power potential already flashes big time. The Twins have no shortage of shortstop prospects, but Javier is among the best of them.

Unfortunately for the former 6th overall pick, health hasn't been something easy to come by. Jay was slated to work solely as a reliever this year, and should be at Triple-A by now at worst. He's on the DL again however, and pitched just two innings at Double-A prior to being shelved. If he can stay on the field, the velocity and stuff play out of the pen, but he needs to get a clean bill of health first.

Taken with the Twins pick at 76th overall in the 2017 MLB draft, Enlow is a prep pitcher with an arrow pointing straight up. He's got a strong fastball that can sit mid-90's, and a host of different outlets called his curveball among the best in the draft. Enlow should have top of the rotation starter potential for the Twins, and ends up being a great value pick for them.

Since being selected in the 3rd round of the 2015 draft, all Blankenhorn has done is rise in the Twins prospect ranks. He owns an .804 OPS in 66 games with Cedar Rapids this year, and the power has started to play. With 12 doubles and eight homers already, he's a corner infielder that can drive the ball out of the park. Blankenhorn could push for a late season promotion to the Miracle, and at just 20 years old, he's got plenty of developing left to do.

At the time of this writing, we've already had at least one opportunity where the Twins could've called upon Jorge. Realistically, he probably could use a stop at Triple-A, but making the jump from Chattanooga isn't out of the question. He owns a 3.35 ERA across 13 starts this season, and has compiled a 6.2 K/9 with a 2.5 BB/9. Jorge doesn't have much in the form of strikeout stuff, and he's not going to blow big league hitters away, but he can pitch, and doesn't miss his spots. Expecting him to get a few turns with Minnesota this year is a good bet.

With their first comp pick in the 2017 MLB Draft, the Twins took the SEC Triple Crown winner from Mississippi State. Rooker can hit, and whether or not he can hit at the professional level will determine his fate. 23 already, Minnesota will move him aggressively. He'll be at Fort Myers for the bulk of 2017, and could push for time with the Twins as early as 2018. Finding him a position, either in the corner outfield or at first, remains a question but the bat should be expected to play. The Twins will likely go with a sink or swim approach to Rooker and have a good idea of what they've got quickly, but I believe there's something special here.

The 2016 first round pick is missing the season due to Tommy John surgery. After suffering the injury late in the 2016 season and being shut down, it's not ideal how long it took for Minnesota to address the root of the problem. Regardless, Kirilloff has time on his side, and he'll have the success of a strong pro debut in his back pocket. Look for him to make an impact in the lower levels of the farm a year from now.

Quite possibly the Twins lone ace prospect, Romero is one of the most intriguing pitchers in all of minor league baseball. He can push his fastball near triple digits, and the command is something he's beginning to hone in on. With a 3.27 ERA through his first 13 starts for Double-A Chattanooga, he's another guy that the Twins could be looking to bump up a level sooner rather than later.

After getting a late start to the year due to injury, Gonsalves has come out of the gate firing. In six starts, he's posted a solid 3.18 ERA, but more impressive is his 11.1 K/9 and the 2.1 BB/9. Gonsalves had a few bouts of command issues during his initial call to Double-A in 2016, but those appear to be all but behind him. While he may not have the upper 90's fastball, his repertoire puts him in the conversation for a very nice rotation piece in the years to come.

If I was to include Lewis on this list prior to 2017, he'd likely have been number one. He just misses out on the top spot now, but the top pick in the 2017 MLB Draft should make Twins fans salivate. He can hit, hit for power, and field well above average at shortstop. The tools are all there for a star in the making, and while he's no less than four years away from the Twins, he'll be one of the top prospects in baseball for the majority of that time.

There's no Twins prospect that has been more impressive than Gordon in 2017. In his first 64 games at the Double-A Level, he owns an .880 OPS and is batting .315. Gordon has clubbed six homers, doubling his previous career season high, and he's already just two doubles away (21) from tying that career high as well. For someone that was noted as a glove first prospect when he was drafted, he's bounced between second and short, now settling back in at shortstop, and all he has done is rake. I'd still like to see him cut down on the errors, but Gordon is continuing to look more and more like a potential All Star.
Posted by tlschwerz at 9:08 AM