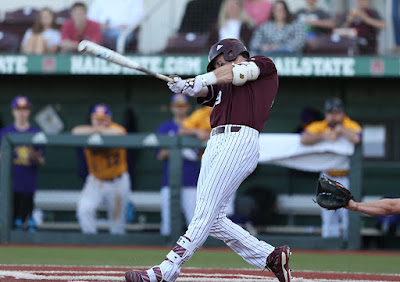 With their second pick in the 2017 Major League Baseball draft, the Minnesota Twins selected Brent Rooker from Mississippi State. He's one of the most exciting hitters in the country, and he's a guy the Twins targeted in 2016 as well. I had the opportunity to catch up with him, and get a little more insight into the process and his game.

Rooker was absolutely incredible for the Bulldogs this season. He batted a robust .387/.495/.810 along with 30 doubles, three triples, 23 homers, 82 RBI, and a solid 58/48 K/BB rate. Playing in the SEC, he was raking against some of the best pitchers in the nation, on a nightly basis. After heading back to college following a 38th round selection by Minnesota a year ago, he became a Twin with the 35th overall pick.

I reached out to Brent and had a few questions for him. Prior to him signing on the dotted line for the Twins and heading to his first stop as a pro, here's a little insight into the newest Twins slugger.


Off The Baggy: You've been drafted by the Twins each of the last two years. Obviously the 30 plus round jump says plenty, but what do you see as the biggest difference in you as a player now compared to a year ago?

Brent Rooker: I really grew and matured as a hitter. I have a sense of how to formulate advanced game plans pitch by pitch, which gives me the best chance to be successful. The conviction to a specific plan and ability to execute that plan is something that I struggled with last year.

OTB: At Mississippi State, you put up video game like numbers at the plate. Explain your approach to hitting, and what you see as being the most challenging at the next level?

BR: I like to be aggressive in the box and look to do damage with every swing. I think my power is my best tool and I need to do everything I can to utilize it as much as possible. Obviously the higher you make it in baseball the better the arms get, so just being able to continue to adjust and compete with elite arms is gonna be a big key.

OTB: Coming off a successful 2017 season with the Bulldogs, what has most prepared you to make the jump to the professional level?

BR: The daily grind of the SEC is something that I was very blessed to be able to be a part of. It's the best conference in the country and we see top 3 round arms every single weekend. It's that kind of competition that I think has really prepared me for pro ball.

OTB: It's the batting numbers that pop off the page, but what are some of the other aspects of your game you think set you apart?

BR: I think my mental preparation allows me to have a lot of success. I take scouting reports and game planning for pitchers very seriously as well as focusing on putting my self in the best mental state for success.

OTB: What do you know about the Twins organization? Have you been to Target Field, or Minnesota in general?

BR: I've never been to Minnesota but I know that it's an outstanding organization with tons of talent from top to bottom. I couldn't be more excited to get started.

OTB: The Twins tweeted out a video of you getting the call, what was the draft experience like for you?

BR: The draft experience was amazing. Being surrounded by my friends and family when I got that call and fulfilled a lifelong dream was a surreal moment that I'll never forget.

Congratulations again to Brent, and this begins the start of what should be a long and exciting professional career.