Leach Looks To Blossom With Twins 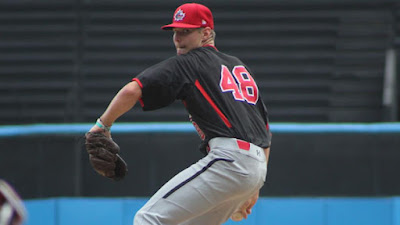 With their second round pick in the 2017 Major League Baseball draft, the Minnesota Twins selected a right handed pitcher out of high school in Canada. Landon Leach may not yet be a household name on the mound, and it's a position he's still growing into, but the Twins see him as a rotation fixture for the future.

Having just transitioned from behind the plate to the mound in the past two years, Leach remains raw on the bump. Shoving a 95+ mph fastball however, there's plenty of reason to be excited about the Twins prep star from Toronto. Now having signed his contract, he's just days away from beginning his pro career down in Fort Myers with the Gulf Coast League Twins.

Before he kicks off the next phase of his baseball life, I caught up with him to ask a few questions.

Off The Baggy: Let's start with the organization, what is your knowledge of the Twins and Minnesota at this point?

Landon Leach: During my first showcase as a pitcher (at 15), Walt Burrows (Twins Canadian Scout) came up to me and was saying positive things about my body type and that they'd keep in touch in the future. That ended up being true as he's the one who signed me. That was really the first contact I had with the Twins. My visit to Minneapolis and Target Field was just a great experience. It's a very nice city; very quiet compared to Toronto I found. I have much more knowledge now about the organization than before the draft.
OTB: Describe your pitching presence to me. What pitches do you throw? What do you rely on? How do you attack hitters?

LL: This is actually just my second year pitching, after moving from catcher. My pitches are fastball (4 and 2 seam), changeup, and slider. I can reach 96 with my fastball, so I can rely on that. My out pitch is my slider, which is above average. My changeup is still in the making, just need to perfect it for strikes. Having been used to coming out of the pen, I'll soon get used to starting. I'm going to need to attack hitters with my fastball, and as the lineup turns over, I'll need to change looks and use offspeed stuff.
OTB: Being from Canada, are you a Justin Morneau fan, or who are some of your big league influences?

LL: Actually, Morneau was one of my coaches for my team Canada trip. I know him fairly well, definitely a great player for the Twins. I feel like my game right now, my body and my arm angle, I'm more of a Corey Kluber kind of guy. I like how he pitches and what he does for his team.
OTB: In making the leap to pro ball, what's the area of your game you think is going to set you a part? What requires the most work yet?

LL: Most amount of work, like I said, I haven't pitched many innings. Getting more innings under my belt is going to be the early focus. I feel like a strength is that I've played against many professional players having been with team Canada. We've gone to extended spring training and instructional leagues to against guys from the Dominican and Cuba, so I have a good idea what the level of competition looks like. I feel comfortable playing against those types of players.OTB: What's the one thing you want Twins fans to know about you as a person, and also as a pitcher?

LL: I love when people interact with me face to face. I've had a lot of support in my classroom and school, and seeing Twins fans continue that support would be great. As a baseball player, I'd do anything to get to the major leagues. The work ethic is there, and I'll do anything for my teammates.

Ready to get going down in Fort Myers, Leach is going to be a player that's absolutely worth keeping an eye on in the coming years. As he continues to grow into a pitcher as a professional, it will be exciting to watch the Twins organization help him come into his own. He should be making starts in short order for the GCL squad, and seeing him rise the ranks is something Twins Territorians can get behind.

Posted by tlschwerz at 7:52 AM