Falvey Gives Twins A Leap In Year One 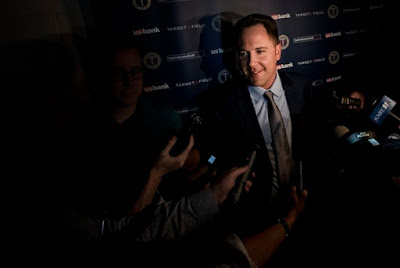 In looking back to some of the things I wrote about Derek Falvey and Thad Levine upon being hired last fall, I stumbled upon a piece that focused on Twins acquisitions. Namely, how well does Minnesota utilize the trade market, and does it work in their favor. You can read that piece here, but the conclusion was that Terry Ryan left plenty to be desired on that front. A year in, Falvey is providing reason for excitement.

Over the course of 2017, the Twins found themselves in a unique position and made a couple of swaps. Despite being positioned well above expectations, they found themselves fading at the deadline and moved some key players as sellers. As they rallied down the stretch and made the Wild Card game, the addition of young talent in the organization should only further the group as a whole in the future.

This season, Falvey sent Brandon Kintzler, John Ryan Murphy, and Huascar Ynoa out. The Ynoa move brought in Jaime Garcia for one start, prior to flipping him to the New York Yankees. The returns included strong prospects such as Zack Littell, Tyler Watson, and Gabriel Ynoa. A Triple-A, and big league ready, pitcher was included in Dietrich Enns, and Minnesota even nabbed some international bonus money. It's one thing to grade these deals on their own, but I think the more important note is what they as a whole say about Falvey.

First and foremost, the new front office was willing to go above and beyond to make sure the return benefitted them. In dealing for Jaime Garcia, the Twins gave up little in Ynoa because they were able to assume the bulk of the veteran starter's salary. They then essentially bought Littell from the Yankees by not sending any of Garcia's money with him. Falvey was able to orchestrate a set of moves that benefitted the organization in one of their greatest deficiencies (starting pitching) and the only cost was a monetary value.

The other standout for me was the acquisition of Gabriel Moya. Despite not being a flamethrower or an overpowering reliever, Moya's numbers at Double-A in 2017 were exceptional. John Ryan Murphy had no place in Minnesota, and had simply become a remnant of how bad the swap for Aaron Hicks really was. Falvey was able to acquire Moya, a player of value and need, in exchange for a guy that served no benefit to the organization going forward.

Heading into this offseason and beyond, it will be through adept trade acquisitions that Falvey and Levine can make their mark. While the Twins farm system isn't what it was, it is rich in certain areas, and that allows for the organization to use prospects as assets. There was a time that Terry Ryan either didn't part with those types of pieces, or you'd prefer he didn't in fear of the return. With the Twins positioned for a lengthened period of success, supplementing the big league roster is a must. That will come from both free agency as well as trades, and the gentlemen at the helm seem more than capable.

If there's a name I'd watch out for over the winter, it's probably Nick Gordon. With Royce Lewis in the system, and Wander Javier blossoming, shortstop may be among Minnesota's best area on the farm. Gordon alone isn't going to command top tier pitching, but he could be packaged along with other pieces to help the Twins in a different way than simply debuting on the roster.

Given baseball being an uncapped sport, teams are allowed to spend to their heart's content. That means organizations like Minnesota, without a massive TV deal, will always find it hard to play in the upper echelon of bankroll. Knowing what internal assets you posses, and how to use them, is going to be huge for the organization moving forward. It's been a very small sample size thus far, but there's nothing to suggest a cause for concern here.
Posted by tlschwerz at 9:27 AM