Glen, This One Is For You Too 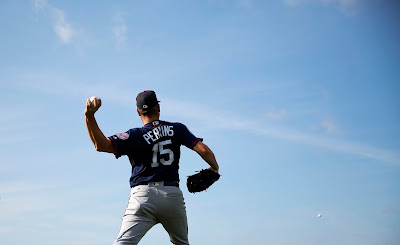 Following his one-out appearance on September 30, Glen Perkins found himself in tears. He came on to throw three pitches in the Minnesota Twins 161st game of the season. Asking Kennys Vargas for the ball as he walked off the diamond, Perkins likely knew the answer to the question Twins Territorians found themselves wondering, "Is this it?" As the club heads to the Wild Card game against the New York Yankees, Perkins isn't on the roster, but this game is as much for him as it is anyone.

Sitting at his locker and discussing the moment with Perkins, I couldn't help but to latch onto the comment he made about his contributions this season. The former closer suggested that he "wasn't really a part of this" and while that may be true in the literal sense, it couldn't be more false in the grand scheme of things. For the past 12 years, Minnesota Twins baseball has been as much about Glen Perkins as he has been about it. As Paul Molitor takes this 25 man group into the Bronx, the moment is for you too Glen.

A first round draft pick out of the University of Minnesota in 2004, Perkins made his debut just 2 years later. Working as a starter through his first three big league seasons, he didn't find his footing in the organization until a shift to the bullpen brought out his true colors.

From 2011-2015, Perkins pitched over 313 innings in relief for Minnesota. He compiled a 2.84 ERA across that span, and owned a solid 9.8 K/9 to go with a 2.1 BB/9. Taking over as closer in 2012, he compiled 118 saves, putting his career mark at 120. That number is good enough for 3rd in Twins history, and puts him behind only Joe Nathan and Rick Aguilera. The hometown kid had gone from failed starter, to solid reliever, and eventually one of the best closers in team history.

For all of Perkins' accolades on the field though, it's almost equally fair to define him by his career off of it. A true Minnesotan in every sense of the definition, Perkins embraced the state as much as humanly possible. Both he and his wife Alisha have been absolute pillars in the community, and have been involved in many more aspects than simply the game of baseball. Both have displayed giving hearts and have worn their emotions for the organization and the state on their sleeves.

Over the years, we've gotten to see so many sides of the Twins man in the 9th. From the emotion of closing out a big game, to the candidness on the radio or a postgame interview, Perkins has been as real as it gets. I can't imagine that no matter what is next, we've seen the end of what contributions Glen Perkins has for Twins Territory. Whether it be more Fifteen's 5 K's or amazing Twitter interactions, I think we can count on plenty more from someone who's seemingly always been about others first.

@benhumbert44 done. have fun. good luck this year to you all. pic.twitter.com/bizzYqA2rm
— Glen Perkins (@glenperkins) January 19, 2016

So, when the Twins take the field at Yankee Stadium for the American League Wild Card, Glen Perkins won't be trotting out to the bullpen. That fact changes nothing however, this is absolutely about him too. This is about a ballplayer that worked himself back from a devastating surgery to pitch at the highest level. It's about a hurler that stopped at nothing to contribute for this club. Heck, it's about a man that wanted nothing more than to give every last ounce of himself to this game, and with that in mind, it's fair to say all of that has been accomplished.

We won't hear his closer music any time soon, but Glen Perkins this game is as much for you as it is anyone else. On behalf of Twins Territory, than you for your hard work and dedication to return for this club, and thank you for 12 years of some really incredible baseball. No matter what is next, thank you for everything that has already been.

Posted by tlschwerz at 8:31 AM