Grading Out The 2017 Twins: Relief Pitching 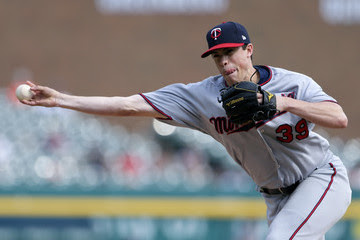 With the Minnesota Twins now finished with both the regular and postseason portions of their 2017 Major League Baseball season, it's fair to look back on the year that was. This group matured, and turned around a catastrophic 2016 effort to once again give steam to a young team going places. It was a group effort, but breaking down individual performances is a must as well.


In order to provide some brevity, we'll make this a three part series. Today, grades will be handed out to the starting pitching. Monday we looked at the offense, Tuesday was the starting pitching and today concludes with the relief group. In 2017, Minnesota had 26 different pitchers make relief appearances. We're going to analyze eight, which is the amount that the Twins generally had at their disposal over the course of the year.

All of the groundwork is out of the way, let's get into it.

After working solely as a starter in his first two big league seasons, Duffey made 56 appearances in 2017 out of the bullpen. He pitched just over half (71.0) of his total innings from a year ago (133.0). In relief, the expectation is that the velocity plays up some, with the hope that the strikeout numbers climb as well.

Duffey picked up a mph (92.3) on his fastball, and just under one more K/9 (8.5) this season. Despite having a strong 3.72 FIP, he finished with a mediocre 4.94 ERA. Giving up 10.0 H/9, Duffey simply allowed too many batters to reach. He had 10 appearances allowing at least 2 runs, and didn't do much to move the needle for Minnesota. I think he fits better in the pen going forward, but the hope has to be that he trends back towards his dominating college self.

On the season as a whole, Rogers has some strong numbers with a few underlying issues. The 3.07 ERA is great, but he dipped down to 7.9 K/9 and allowed 3.4 BB/9. On top of that, his FIP climbed to 4.09. After being lights out in the first half, Paul Molitor continued to ride him against righties and found the youngster getting exposed.

Rogers hasn't really ever been great against righties, and that should be the expectation going forward. He's serviceable in that scenario, but is a true weapon against left-handed batters. If used properly, and maybe a bit less often, Rogers should be a solid middle-to-high leverage option for Minnesota.

While he's hardly anything flashy, and wasn't suited for the closer role, Belisle came through on the one-year deal Minnesota handed him. A free agent again going into 2018, Minnesota could look at bringing him back. He's not going to push the needle much, but Belisle showed he had enough left in the tank for his age-37 season.

Expected to be one of the best pieces in the Twins pen this year, Ryan Pressly stumbled a few times. The 1.5 HR/9 was a career worst, and they generally seemed to come at the worst times. Owning among the highest velocity in the Twins pen, Minnesota needs Pressly to be on his game more often going forward.

The strikeouts were there (9.0 K/9) and the walk numbers didn't jump off the page. Pressly experienced a couple demotions on the year, and while it wasn't a great campaign as a whole, he ended on a solid note. In 2018, Molitor will need the fireballer to return to a lockdown option in the late innings.

If you were unaware of how good Hildenberger could be, you probably weren't reading the right places. With strong minor league numbers throughout his career, he was the often left out name among the group including Jake Reed and Nick Burdi. The sidearmer isn't a high velocity guy, but it is far from just a gimmick as well.

Hildenberger worked his way into the late innings for Molitor and rewarded the club nicely. A 9.4 K/9 with a 1.3 BB/9 in his debut season was plenty nice to see. The 3.21 ERA has room to go down next year, and he should be a lock as a go-to guy going forward.

Coming out of nowhere a year ago, Boshers did enough to hold on throughout the season. He worked virtually the same amount this season, but took steps backwards everywhere. Less strikeouts, more walks, terrible FIP, and allowed way too many homers.

As a lefty killer, Boshers was serviceable enough. The .655 OPS against versus lefties got him through the year, but there's other guys that can do that job, and do it better. Molitor does have a level of comfort with him it seems, but I'd be shocked if he has a role in 2018.

It took a while for Molitor to take off the training wheels, but across 31.2 IP, the lone standing return for Alex Meyer turned out to be a great pickup for Minnesota. Busenitz owned a 1.99 ERA but did have some suspect areas as well. You'd like to see more than 6.5 K/9, and the 1.1 HR/9 isn't ideal either. That said, Booze throws heat, and has the looks of an impact arm in relief.

There shouldn't be much doubt that Busenitz needs to be penciled into the Twins 2018 Opening Day relief corps. He could begin in a middle relief role and push for more high-leverage work as the season goes on. I'd like to see him trend up a bit more across the board, but in his debut, there's a lot to like here.

Having spent arguably too much time in the minors prior to being promoted to the active roster, Gee was huge for Molitor and the Twins in 2017. As a reliever, he worked 33.1 IP and compiled a 1.35 ERA. The strikeout numbers were serviceable at 7.6 K/9, and he limited walks, Gee is never going to be a lockdown guy as a starter or reliever, but he was the best long reliever Minnesota has had in quite some time.

Going into next season, the Twins should be adding a handful of impact relief arms. Guys that can push velocity and generate strikeouts is a must for this group. Having Gee back there to pick up the pieces after short starts is a good decision though, and if he can replicate his 2017, that's a really nice asset.