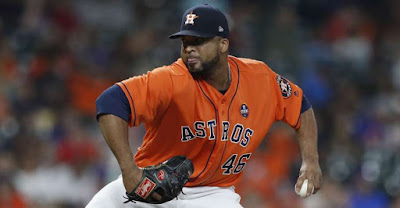 After an exciting American League Championship Series, the Houston Astros are headed to the 2017 World Series. In an event that was determined destiny three years ago by Sports Illustrated, this home grown group is looking to knock off a very good Los Angeles Dodgers team. While the hometown nine has been eliminated, two former Minnesota Twins could be eyeing their first rings. If you need a local connection, both Francisco Liriano and Juan Centeno may provide it.

Playing in 55 games for the Twins a season ago, Centeno was cast off as Minnesota looked to improve their position group behind the plate. He own a career best .704 OPS and hit three homers for the Twinkies. However, he threw out just 14% of base stealers, and provided little value for a guy that needed to be defense first.

This season in Houston, Centeno has seen somewhat of a different path. 65 games this season were played with the Triple-A PCL team in Franco, where Centeno surprisingly batted .311 en route to a .737 OPS. Earning a big league promotion, he contributed across 22 contests for Houston, owning a .632 OPS on the year. He was actually worse behind the plate in the running game, throwing out just 8% (1-12) of base stealers.

Although Houston will likely wait til the final moment to set their World Series roster, Centeno figures to be on it. The club carried three backstops in the ALCS, as Evan Gattis serves often as the DH. Despite the possibility of four non-DH games, having three catchers at his disposal allows for A.J. Hinch to maneuver bats in key pinch hit scenarios.

In the bullpen, the Astros employ another former Twin, and it's again a player that didn't spend the bulk of the season with this club. Now pitching in relief, Francisco Liriano would be classified as the long men out of the pen. In a seven game do-or-die series, that's an arm you'd probably rather not need to use. With a long man filling in during a short start or blowout, Houston would likely prefer to keep Liriano from toeing the rubber through the rest of the season.

That being said, he made 18 starts for the Blue Jays prior to coming over to Houston. A 5.88 ERA and 4.73 FIP was hardly something to get excited about, but the 8.1 K/9 could play, and the hope was that some command issues could be resolved. Down the stretch for the Stros, Liriano worked 14.1 IP across 20 appearances. His 4.40 ERA was better, but the biggest issue remained the free passes (an ugly 6.3 BB/9).

Liriano too was included on the club's ALCS roster, and should be an expected name to be taken to the World Series. Despite the lackluster pen that the Astros employ, one can guess that A.J. Hinch will be relying heavily upon names like Musgrove, Devenski, Peackock, and Giles to get Houston to the finish line.

In the World Series, Houston is absolutely going to need to hit their way to a title. Yes, both Dallas Keuchel and Justin Verlander can twirl gems, but Charlie Morton and Lance McCullers remain relative wild cards behind them. As the Dodgers have one of the best bullpens in baseball, it will be on the Houston bats to continue the hot streak they started at the tail end of the ALCS. That plan of attack doesn't leave much room for contributions from the two former Twins, but that doesn't water down their part in all of this.

At the end of the day, both Juan Centeno and Francisco Liriano have an opportunity to win a World Series ring, and that's something so few players ever get to experience. For the sake of the Astros representing the American League, and both former Twins representing all of Twins Territory, here's to hoping the Lunhow's organization can in fact #EarnHistory.
Posted by tlschwerz at 8:51 AM