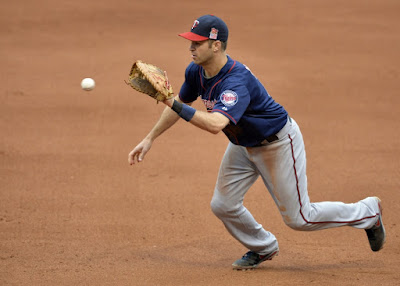 Today, Rawlings released the finalists for the American and National League Gold Glove Award. The awards are voted on by each manager and their coaching staff via a balloting process. Over the years, the award has drawn plenty of criticism for poor selections, and too much of an offensive focus. For 2017, that couldn't be more true as Joe Mauer was omitted.

Yes, you read that correctly. Mauer not only didn't win the award, he wasn't even named a finalist.

Among the trio up for the award, you have the Red Sox Mitch Moreland, Indians Carlos Santana, and Royals Eric Hosmer. As I have been suggesting all year on Twitter, Mauer should've been considered a near favorite. The first two members of the trio were his competition, and Eric Hosmer belonged nowhere near the finish line.

While defensive metrics are hardly the sole criteria for the award, a defensively focused acknowledgment should account for them. Across the board, Mauer seemed to lead the pack. Here's how he ranked among his competition (note: There were 12 qualified 1B in the AL during 2017):


Looking at the defensive metrics above, Mauer is evidently better across the board than each of his peers. While both Moreland and Santana come in close, it would seem that the overall strength of his range and ability make Mauer the favorite to win the 2017 Gold Glove. Although he doesn't see him as the favorite (Moreland is), Bill James also notes that the three finalists for the award are clearly Santana, Moreland, and Mauer.

Often, the debate whether or not hitting production be brought into the Gold Glove award is a talking point. Given the reality that the acknowledgment is for defensive prowess, it seems an odd proposition. For context though, here's how the four players looked offensively in 2017:
From a slugging perspective, Mauer has never (and will never) be the hulking first basemen type. He isn't going to launch 15-plus homers in his career ever again, and his offensive ability will forever be tied to his plate discipline and ability to get on base. Again however, the Gold Glove Award isn't supposed to be designed as a reflection of the total production from any position player.

At the end of the day, fans around Twins Territory have a legitimate gripe, and managers across baseball should be ashamed of their choices. Whether or not you put stock in sabermetrics, there isn't a single defensive statistic that views the Royals first basemen as anything but the lowest tier with his glove. While he does present a legitimate power bat, the Silver Slugger award shouldn't be carried into other voting circles.

Sometime following the World Series, an American League first basemen will be awarded the Gold Glove. With it not going to Mauer, a repeat performance for Mitch Moreland seems appropriate. Being robbed of the 1st catcher to ever win a Gold Glove at another position, and just the third player in baseball history to win the award at two positions, it's tough to see Mauer dealt this hand.

The evidence pointing towards Mauer being the American League's most elite first basemen was prevalent all throughout 2017. It's discouraging that coaches across the big leagues apparently missed that boat. Then again, Eric Hosmer has the name and the sexy numbers, so why not make the ignorant selection?
Posted by tlschwerz at 11:43 AM