The Judge Rules The Show 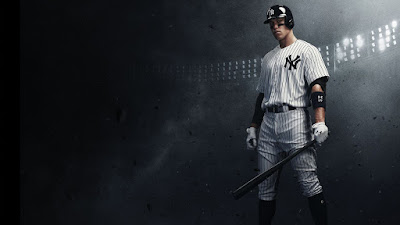 Expected to be announced later this evening officially, it appears that Yankees right fielder Aaron Judge will grace the cover of MLB The Show 18. The New York phenom, who a shoe-in for the Rookie of the Year award, will give a polarizing presence to the cover of the upcoming iteration from Sony's San Diego Studios.

This season, Aaron Judge went from a 27 game sample size with a .608 OPS, to a major league record in home runs for a rookie. His 52 longballs led all of the American League, and there's a legitimate argument for him to be made the American League rookie of the year. While strikeouts were also a part of his game, a good command of the zone also led to a league-leading 127 walks.

Over the course of the season, Judge attribute changes than anyone in The Show 17. Starting on March 28, Judge was a lowly common player in the Diamond Dynasty mode of the game. At 68 overall, his power numbers were just 60 vs righties and 68 vs lefties. A early season surge was met with incremental boosts across the board, and it wasn't until June 23rd that he reached the gold tier (85 OVR) with an 87 OVR. After seeing a slight dip in August, Judge was given a one point boost back up to 88 OVR in the final roster update of the season. Thanks to Daddy Leagues (@DaddyLeagues) for providing the portal to look back at Judge's 2017 The Show changes.

Thanks to a 22 game April that resulted in a 1.161 OPS with 10 homers, Judge received one of the first flashback Player of the Month cards in The Show 17. That card was hit with an 88 OVR rating, his eventual Live Series OVR, and quickly became one of the most sought after cards in the game. Proving his ability to keep a consistent level of production over the entirety of the season, it only makes sense that both his Live Series and flashback card would virtually mirror each other statistically.

After another early season stumble out of the gates due to server issues, and more than a few gameplay complaints over the game's life cycle, San Diego Studios needs a near flawless release for The Show 18. While there's plenty of anti-Yankees fans out there, there's no denying the polarizing nature of Judge. He's got an incredible ability to destroy the baseball, won the Home Run Derby, and plays the game with an infectious smile.

Look for Sony San Diego to make the announcement official later this evening, and thanks to Twitter user @AquaX107 for his sleuthing capabilities. It should also be pointed out that T.J. Lauerman (@ThatSportsGamer) has given us a glimpse of the three different editions of the title. MLB The Show 18 is set to release on March 27th, 2018.

Details from the game's editions (via Reddit) are as follows: 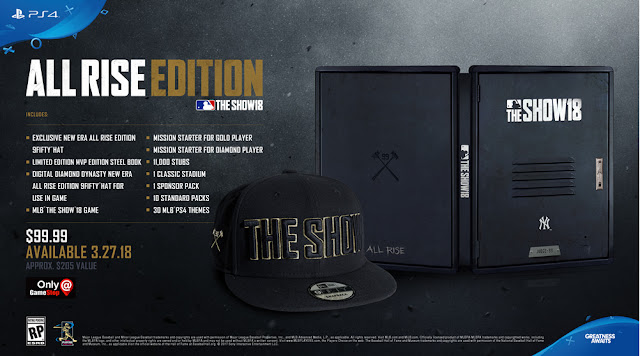