Twins Closing In On A Closer? 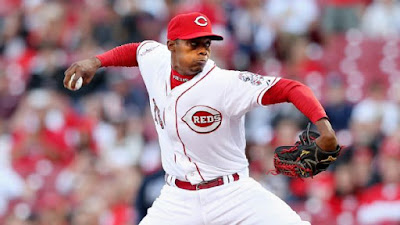 Over the weekend, news broke that the Twins checked in on the availability of Cincinnati Reds closer Raisel Iglesias. While he's undoubtedly not the only player Minnesota has looked at on the trade market, his name has filtered into the media cycle at this point. No matter how much substance there is to the situation moving forward, it's worth looking at Iglesias as a player, and whether or not he fits for the Twins.

First and foremost, Minnesota needs to shore up the bullpen heading into 2018. While Brandon Kintzler and Matt Belisle did an admirable job in the closer role for Paul Molitor a season ago, it's hard to imagine either in that scenario during game seven of the ALCS. As the Twins look to follow up a postseason berth this year, they'll no doubt have sights set on a deeper venture towards the World Series. While relief pitching has become the sexy topic in the playoffs, the reality is a complete team still trumps everything. The Astros won a World Series with a bullpen that was virtually on par with Minnesota in 2017, and that's worth keeping in mind.

Getting to Iglesias in a vacuum, the Reds current closer is a soon-to-be 28 year old from Cuba. He is not a free agent until 2022, and is currently signed on a team friendly contract through 2020. Across 76.0 IP in 2017, Iglesias picked up 28 saves and posted a career best 2.49 ERA. His 2.70 FIP was also a career best and he cracked 10.0 K/9 for the first time in his big league career. As a starter during the 2015 season, Iglesias sat around 93 mph with his fastball. In relief last season, he was pushing 96 mph on average and dropped down to 85 mph on his slider.

Despite being a bit of an older player, Iglesias quickly ascended to the big leagues. After signing out of Cuba, he pitched just 29 innings at Triple-A prior to his 2015 debut. Raisel only threw three seasons in Cuba before taking his age 23 year off to go through the process of getting stateside. Even at 28, you'd like to believe his body is a bit better for the wear.

Should Minnesota choose to pursue him, the asking price would probably be substantial. Wade Davis was just a one year rental at 31 years old for the Chicago Cubs, and he required the Royals receiving Jorge Soler in return. Still under team control, and with age on his side, I'd imagine the Reds would ask the Twins for at least one top six prospect. If I'm Minnesota, it's a hesitant place to start, but something I'd be interested in hearing out.

As a general philosophy, I believe it makes sense for teams close to winning to parlay either picks or prospects into immediately usable assets. Obviously this isn't a practice you can repeatedly employ or you run the risk of depleting your long term viability. Tracking guys with qualifying offers or dealing top prospects will eventually leave you in a barren place on the farm. That being said, Minnesota finds themselves in unique territory given the current organizational landscape.

Following a strong season, most of the club's top prospects from the past few seasons have reached the big leagues. They won't hold an enviable draft pick having finished as one of the final teams playing as well. If the Twins can entice Cincinnati with someone like Nick Gordon or Alex Kirilloff, they could get a solid return for someone that may be an expendable piece.

Closers are a fickle beast, and I'd hate to see the Twins acquire Iglesias only to use him in the 9th inning of games they lead. Ideally, bringing him in would involve him being relied upon to get high leverage outs regardless of where in the game that is. Also, if Gordon or Kirilloff generate that much interest, I'd probably see what other starting pitching they may be able to net as an alternative. If this is the only level of return that seems viable though, it's tough to pass up.

The reality is that the Minnesota Twins aren't too far away, and raising the water level of the big league roster is a must. There's some really strong impact prospects in the farm system, but some of them are representative of the next wave. While you'd love to see everyone you draft come through your system, sometimes the best tradeoff is matching them elsewhere and turning a prospect into an immediately usable player.

With the GM meetings ready to kick off, and the Hot Stove warming up, we'll get plenty more exciting nuggets in the weeks and months ahead. Derek Falvey and Thad Levine seem to know they have something exciting on their hands, and I feel comfortable with the direction the seem to be running in.
Posted by tlschwerz at 8:02 AM