One Abbreviation Highlights The Need For Another 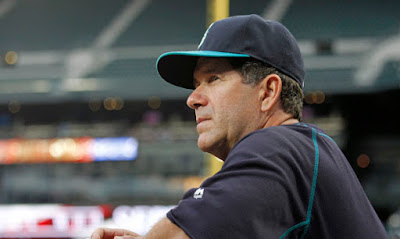 This time of year, especially with the free agent market moving as slow as it is, puts the Hall of Fame in the spotlight. Although the Hall tends to do more bad than good in the press (yes Joe Morgan, you're at fault here), the ballot does get us to some intriguing talking points. I've written plenty about my stance on voting and who should get in, and I'll share my IBWAA ballot in the coming weeks. In 2017 though, the HOF highlights the need for the universal DH.

A quick look at the timeline of Sporting News' Ryan Spaeder will hint that he's on a crusade he shouldn't need to be embarking upon. As with Tim Raines a year ago, Edgar Martinez has been the cross taken up with Spaeder and some other writers around the baseball community. On the ballot in his 9th year (of 10 eligible), Martinez is drawing eerily close to missing his opportunity to be voted into the Baseball Hall of Fame in Cooperstown.

In 2017, Martinez received 259 votes (58.6%). He needs to jump just over 15% in his final two ballots to reach enshrinement, and that it looks like an uphill battle remains a sad development. While the BBWAA has voted previously to expand the possible votes from 10 to 12, the Hall of Fame shot the motion down, and a stacked ballot continues to haunt players that are simply left out. While the IBWAA did the right thing and inducted Martinez in 2016 alongside former teammate Ken Griffey Jr., the BBWAA has yet to follow suit.

Over the course of his 18 year career, Martinez was a seven-time All Star, five-time Silver Slugger, and racked up two batting titles. He owns a career .312/.318/.515 slash line, and he's one of very few players that can claim more walks (1,283) than strikeouts (1,202) to their credit. The one detractor everyone seems to point at when considering Martinez comes down to two different numbers. First, the amount of games he played in the big leagues (2,055). There's nothing wrong with that number, but it's the 560 games started in the field that apparently holds him back. The simplest way to address that argument is to flat out call it wrong.

Even if Edgar Martinez was the worst defensive first or third basemen in the majors for those 18 seasons, he would've been among the greatest hitters to ever play the game. At 65.5 career fWAR, there's just five third basemen with a higher mark in their career. One of them is retired, and based upon his merits in the game should be in the Hall when eligible (Alex Rodriguez). Two of them are still currently playing, and should be Hall of Fame locks (Adrian Beltre and Miguel Cabrera). Another is on the ballot and isn't given enough credit, despite much of his value coming on defense (Scott Rolen). The final name is Graig Nettles.

Looking at the landscape we just explored, Martinez has compiled an fWAR number on par with every Hall of Fame third basemen already enshrined, and did so solely by the production of his bat. Again we reach the crossroads of the designated hitter becoming disrespected. It's at this point, and upon the induction of Martinez, that the game needs to change.

In the National League, on a nightly basis, pitchers embarrass themselves at the plate. Failing to get down a bunt, flailing away, or having to stand in for the first time since high school is not something that should take place in a big league game. While Madison Bumgarner is hitting his one or two longballs a year, he's still a terrible hitter that has no business ever batting over a big league offensive player (yes, that was silly Bruce Bochy).

The game of baseball has changed in 2017, and even earlier than that to be fair. Managers use closers in high leverage situations as opposed to just the 9th inning, platoons give offenses a tactical advantage, and shifts seek to steal away would be base hits. Specialty play is something that game has embraced for the better, except when it comes for the players to be recognized after they are done.

It's not the fault of Trevor Hoffman, Billy Wagner, or Lee Smith that they pitched one inning a night. The were the by-product of the save, and in turn, were exceptional at the task they were called upon to complete. Martinez may have been able to hack it in the field longer than he did, but wielding just a bat, he was among the best in the game. It's time those things are remembered when the votes are cast.

Looking ahead to the class reveal on January 24th, I fear Martinez will be staring his final year of eligibility in the eye. It's a situation I can't imagine the beloved David Ortiz will find himself in (steroid accusations or otherwise), and it's disgusting that the Mariners star has to shy away from what he was as well. Edgar Martinez was, on a nightly basis, designated to hit and that's exactly what he did. We're long past due on enshrining him for that greatness, and in turn, allowing baseball to embrace the specialty across both leagues.
Posted by tlschwerz at 11:19 AM