Twins Hinting At A Busy Offseason 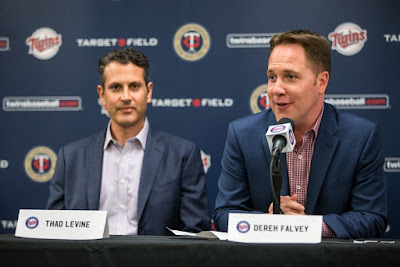 Recently, the Twins (and all of Major League Baseball) had to finalize their 40 man roster in regards to Rule 5 Draft protection. While the Rule 5 Draft isn't until the conclusion of the Winter Meetings, any eligible players left unprotected on the 40 man are now eligible to be taken by other clubs. With Minnesota having around six guys they could've added, the expectation was that more than a few would be chosen. After the dust settled though, we may have gotten our first teaser into what will be a busy offseason.

Prior to the deadline for 40 man additions, the Twins added three pitchers to their 40 man roster. Top starting prospect Stephen Gonsalves was joined by Zack Littell, and Lewis Thorpe. Littell was acquired from the Yankees when Minnesota ate Jaime Garcia's salary, and Thorpe has rebounded well from Tommy John surgery. Those three were essential locks, but the exclusion of three names may turn some heads. I'd argue the assumed expectation was that each of Jake Reed, Kohl Stewart, and Lewin Diaz would be added as well.

After the moves were made, Derek Falvey and Thad Levine had four spots left to work with on the 40 man. Sitting at 36 of 40, each of the three aforementioned players could've been included, but there's most definitely a reason they were left off. First and foremost, it may be best to take a look at their individual contributions.

Reed was a 5th round pick in 2014, seen as a fast mover through the system, and a way to garner relief help at the major league level. Outside of a tough 2015, he's been very good for the Minnesota organization. Despite missing time to start 2017 following a spring training injury on the final day, he posted a 2.13 ERA across Double and Triple-A. While Reed has a relatively safe floor, the ceiling may have decreased some in recent years. As the strikeouts have sagged, the walks have risen. Had things broke differently in 2017, he probably would've been a no-brainer for a September call up.

The highest pick of the three, Kohl Stewart, may be the most intriguing. Taken 4th overall in the 2013 draft, the former Texas A&M quarterback recruit has never flashed top of the rotation stuff. Velocity is middle-of-the-road, while his game has been generating ground balls. He owns just a 5.9 career K/9 and posted a 6.1 K/9 to go with a 5.3 BB/9 mark at Double-A in 2017. The former regime showed patience through injuries and development stemming from a kid just beginning to play baseball full time. Now at 23, the flame out worries are genuine, and it seems the new regime has more questions than answers.

Rounding out the trio is Lewin Diaz. Diaz was signed out of the Dominican Republic and has long been a prospect darling as a power bat. After putting up a .928 OPS in the App League during 2016 as a 19 year old, 2017 became an important year for the lefty masher. Diaz posted just a .773 OPS at Single-A Cedar Rapids, but did hit for average (.292) and added 12 home runs. I'd imagine the thought process here is that if a major league team wants to gamble on bringing a 21 year-old yet to play above Single-A to the big leagues for a full season, that's a risk Minnesota is willing to let them take.

Looking at the three main omissions as a whole, Diaz seems to be the most understandable. I'd wager there's about a 35% chance he's lost in the Rule 5 Draft, and for a power hitting, bat first type, that's something you can probably replace. Both Reed and Stewart are different stories, and I'd put them at 100% and 90% gone respectively. Reed is big league ready right now, even if he's not yet a polished prospect. The walks are an issue, but there's strikeout stuff there even if it's only in the mid-90's. Stewart probably can't start on a regular basis in the big leagues, but being stashed in long relief for a pitching-needy team seems to be a smart bet.

With Falvey and Levine willing to lose two decent pitching commodities for an organization who could use more, the assumption is that more must be in play. Reed could've been added to the 40 man, and helped to fill out a Twins pen needing improvement. In being passed over, and with spots open, it's almost certain that Twins brass sees the need for proven big league help in the pen. Rather than taking fliers on guys that could accept a minor league or one-year deal, it stands to reason a big league contract could be offered to a true arm.

On the starting side, Stewart represents more quantity than quality in terms of starting depth. While the Twins need to beef up their rotation, right now the group of guys filling out the back end seems to be relatively plump. Adding top of the rotation pieces is where Minnesota needs to focus, and Stewart doesn't ever appear to profile as that. Again, open 40 man spots suggest that pitching is going to be a focus, and we should have clarity soon enough.

It'll be interesting to see if Minnesota can package either Reed or Stewart in any prospective trade talks. With the market for starting pitching being thin, and the expected loss of both players in the Rule 5 Draft, they could be moved for a return prior to that date. It's always tough for prospects of a former regime to find their footing amongst new bosses, but it seems the Twins levied some clarity to the group. Now, the organization will begin to show us what they intend to do with their four open roster spots, and that's plenty exciting.
Posted by tlschwerz at 6:44 AM