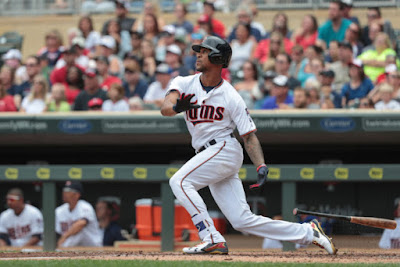 Now in it's third installment, the week of Thanksgiving prompts the revealing of the Minnesota Twins Diamond Treasure. Crafted after being moved by the 2015 Turkey of the Year piece penned by Patrick Reusse of the Star Tribune, this article has been carried on at Off The Baggy. The Diamond Treasure is designed to be able to highlight a player or area of the organization showing excitement for the future, while having roots established in the past.

Now in the third year, the inaugural winner was Miguel Sano. Last season, the new front office tandem of Derek Falvey and Thad Levine too home the Diamond Treasure. For 2017, I think the designation was all to glaring to overlook. Minnesota centerfielder Byron Buxton is your diamond treasure.

The soon-to-be 24 year-old is coming off his best season as a big leaguer, and we've only begun to scratch the surface. Debuting with the Twins at 21 years-old, things are just now beginning to bear fruit. Picking up enough votes to finish 18th in MVP balloting and tally his first (of many) Gold Gloves, Buxton show plenty of promise to get excited about his future.

As things stand currently, the former first round draft pick may be the best defensive outfielder in all of baseball. He essentially redefined the Statcast-era of defensive metrics this season, owning the top spot in Outs Above Average and Catch Probability. His sprint speed numbers dubbed him as the fastest man in the game, and his Gold Glove was actually a proper reflection of his defensive acumen in terms of sabermetrics. What's most impressive though, is that he's just scratching the surface as a player.

In garnering the MVP votes, Buxton was able to do so despite hitting below the Mendoza Line as late as July 3. His defense didn't slump, and the speed never will, but that early season struggle at the plate hung over his head for most of the season. Broken down however, James Rowson was able to reconstruct the centerfielder's swing at the highest level. After finding a better footing, Buxton slashed .285/.339/.492 from June 11 onwards (85 G). Over the course of a full season, that level of production no doubt vaults Buxton into a top five MVP conversation.

Thus far through his big league career, Byron Buxton has experienced a roller coaster of emotions. With so much promise and hype, the former top draft pick was never going to escape the immense expectations set out for him. The reality however, is that he remains a kid by big league standards, and is just now coming into his more adult frame. With 278 games at the highest level under his belt already, Buxton far surpasses what Kirby Puckett (0 games) and Torii Hunter (142 games) had for MLB experience prior to their 24th birthdays. That should only enhance the belief in what's yet to come.

Sometimes players race out to an immediate showing of exceptional ability, and whether it fades or sticks, remains a mystery. For Buxton, it appears a level of growth was a slower process, but he's been made all the better for it. There's a good amount of time yet before he'll be considered in his prime, and the amount of high level production to be expected should be sustained for well over a decade. Developed from within, and bearing fruits internally, the Twins find themselves in as great of a spot as Buxton himself.

We haven't even begun to see the best of the Twins star centerfielder, but at this time of thanks, I think it's fair to be thankful that the hometown team has a legitimate superstar on their hands. 2018 should be a ton of fun for the organization, and it could be the one where Byron becomes the poster boy.
Posted by tlschwerz at 9:18 AM