The Case For Carlos 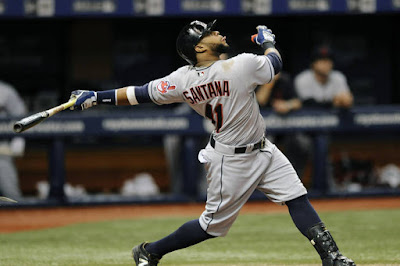 With Major League Baseball free agency ready to get underway, general managers and organizations will begin pitching to players why they should sign with their respective teams. For the Twins, pitching will once again remain a focus, but for a team looking to take the next step, a nice offensive additional may not be a bad play. There's multiple options out there, but a former divisional foe should be the place they turn first. That guy is Carlos Santana.

The former Cleveland Indians slugger is out on the open market, and while he'll almost certainly have a qualifying offer attached to him, it makes sense for a competitive organization to part with a draft pick for his services. The soon-to-be 32 year-old is coming off a season in which he posted an .818 OPS and launched 23 long balls for the Indians. Even if Derek Falvey didn't have previous Cleveland ties, a match here seems to make a lot of sense.

Judging the Twins needs on offense, the most glaring area last year was a right-handed power bat. If that player could offer something on defense, that would only further the notion of it being a well-found pairing. Santana is a switch hitter, and while he hit righties better in 2017, he's been a tick better (.815 OPS vs .809 OPS) from the right side over the course of his career.

Defensively, he's long since moved out from behind the plate, having not caught a game since 2014. Outside of a seven game stint in right-field during 2017, Santana has honed his craft at first base and designated hitter. While he can be a hitter only, serving as the Indians DH in 92 games during 2016, his first base abilities have generally led him to play the game with a glove at his disposal as well. Over the course of 140 games at first base this season, Santana was among the premium defenders at the position. He posted 10 DRS, a 4.8 UZR, and 1.4 RngR. While Eric Hosmer is a laughable inclusion among the Gold Glove finalists, Santana should be considered a real candidate to win the award along with Mitch Moreland.

For Minnesota, the acquisition of Santana would likely make Robbie Grossman expendable. Whether or not the Twins tender a contract to the switch hitting outfielder, Grossman served as a capable bat in the DH role. For the club to take a step forward next season however, pushing for more than just an on-base machine would be a good practice. Grossman's .741 OPS wasn't the .828 mark he produced in 2016, but the .361 OBP was again respectable. However, he combined to hit just 20 homers over the past two seasons, and put up a total of just 41 doubles.

In Santana, the Twins would be adding to a lineup that has already proven capable of winning games, and doing so without hurting their defense. Santana would be able to spell Joe Mauer at first base, giving the Twins two very good defensive options. Grossman's production would be expanded upon, and a guy like Kennys Vargas would no longer need to surface in the starting lineup. Santana has clubbed 57 homers over the past two seasons, while averaging over 20 in each full season of his career. Add to that the consistent doubles production of around 30 a season, and Minnesota would find themselves with some additional thump to the middle of the order.

Along the lines of priority, I've suggested that the Twins add a starting pitcher and two relievers prior to adding a bat. In reality though, I think a productive offseason consists of each of those four acquisitions becoming a reality. Whether or not Santana is the first domino to fall or the last, it doesn't preclude the club from making the other necessary decisions to put their best foot forward for the 2018 season.

At this point, the door for competitive baseball has begun to open for Minnesota, and as young players like Miguel Sano, Jose Berrios, and Byron Buxton continue to blossom, supplementing them with other proven threats is a must. The Indians are going to remain the team to beat in the AL Central, but counting the Twins out for the division and beyond is probably a foolish decision. Derek Falvey and Thad Levine can make this club even more of a contender by being aggressive as the time appears right.
Posted by tlschwerz at 10:33 AM