A Rift at the Top in Minnesota? 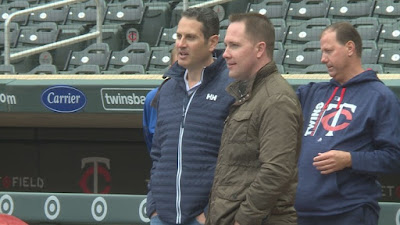 The Minnesota Twins front office is sure making a habit of blundering important decisions here in September. With respect to Byron Buxton, and the late season promotions, there's plenty of head-scratching and hand-wringing to be observed. At this current juncture, it's maybe worth speculating if everyone isn't on the same page?

Over the course of the 2018 major league season, I have found myself as a supporter of the new front office. Derek Falvey and Thad Levine had an exceptional offseason, and they positioned this Twins club for success in the current season. As everything has gone up in flames however, their responses have seemed less than satisfactory. Now as real adversity creeps in, we may be seeing some cracks in the armor as well.

Obviously the biggest misstep thus far has been the handling of Byron Buxton. This isn't the space to rehash that situation, but I believe I did a good job of explaining the situation here. Looking back at it however, something has stuck out to me, and that's the quote from Thad Levine to Mike Berardino. Minnesota's GM said, “Their recourse has not been laid out to us. They’re certainly entitled to whatever they think is in the best interest of Byron Buxton. From this day forward, I think we recognize a responsibility to make amends and that we’re going to need to invest in the relationship with Byron Buxton. We understand this is a blow to the player, a potential blow to the relationship."

In analyzing that quote, it's hard not to wonder why the Twins GM is being so open and candid about the situation as a whole. He talked about service time implications to the media as well, and the suggestion that this team decision could be potentially damaging to a long term relationship speaks volumes. As the only member of the front office to speak on the decision thus far, it's hard not to speculate as to whether Thad is simply acting as the orator here, and there's some dissension in the room.

Derek Falvey is 35 years-old and holds the title of Chief Baseball Officer for the Minnesota Twins. His top rank previously was the title of Assistant General Manager for the Cleveland Indians. While he's obviously skilled and qualified for the role in which he's been enlisted, there's also an equally capable and qualified network of support around him. When making such delicate decisions, it's more than fair to wonder whether or not his peers all jump onto the same page.

When it comes to head-scratching options, Minnesota embarked on another when they revealed their full list of September call-ups. On top of the egregious missing name in Buxton, neither Nick Anderson or Jake Reed saw their names included among the group either. The Twins are currently 63-74, 14.0 games out of the AL Central, and have nothing left to play for in 2018. With those parameters, September immediately becomes a breeding ground for acclimation and assimilation with talent that could prove useful on the 2019 Opening Day roster. Except the Twins chose to forego that route.

It's great that John Curtiss, Chase De Jong and Tyler Duffey found themselves recalled, but so too did Chris Gimenez, Gregorio Petit, and Johnny Field. The latter three players represent veteran retreads that have no real value on a big league bench. Given the current state of the team in Minnesota, Mitch Garver or Jake Cave losing at bats to that duo seems counter productive. On top of that, the Twins left a stocked cupboard and closed the door. There's two spots still open on the 40 man roster, and of the 40 spots available on the active roster in September, only used 34 of them.

Anderson, a Minnesota native, turned in a 3.30 ERA, 13.2 K/9, and 2.9 BB/9 across 60.0 IP for Triple-A Rochester this season. Jake Reed posted a 1.89 ERA and 9.4 K/9 in 47.2 IP, and owned an even better 1.16 ERA in his last 31.0 IP. After signing multiple relief arms to short term deals this winter, squeezing out all the available talent within the organization seems like a smart blueprint. Given that neither now have an opportunity at the major league level in September, their afforded sample size will be a minimal one during big league camp (assuming they are invited, and still around).

Without being behind closed doors, it's impossible to know what Derek Falvey's impact on each decision is. It's also unfair to assume how he is viewed by his peers. What is absolutely certain though, is that there's a danger to always believing you're the smartest person in any given room. If the operating tactics are less collaborative than the amount the term has been used by the head honcho, it's hard to see how lackluster buy in is a positive.

Maybe Levine's comments surrounding Buxton are nothing more than they appear on the surface. Maybe no one in the front office saw the idea to waste the opportunity September roster expansion provides as a bad thing. Maybe everyone truly is on the same page. If that's the case though, we might be in even more trouble than it seems.
Posted by tlschwerz at 7:11 AM