Minnesota and the Arms Race 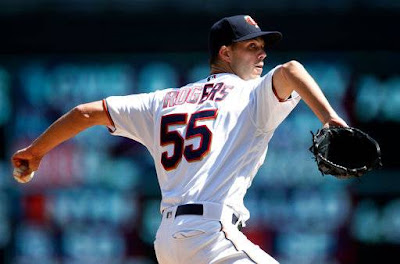 Over the past few seasons, it's been fun to watch the emergence of a few arms for the Minnesota Twins. While starting pitching is obviously the premium you'd like to corner, talent in the relief corps is where some unusual suspects have emerged. From Ryan Pressly to Trevor Hildenberger, the 2018 culprit is a guy that already showed some promise a season ago.

Lefty Taylor Rogers has become a mainstay in the Twins bullpen, and after a 3.07 ERA across 55.2 IP during 2017, that was a realistic expectation. As a 27 year-old without much prospect fanfare though, it was safe to question whether the numbers could hold. Utilized best as a lefty on lefty specialist last year, the 3.4 BB/9 provided some reason for pause. While Rogers enjoyed a sparkling ERA, the 4.09 FIP told a different story, and the 7.9 K/9 was nearly a 2.0 K/9 dropoff from his rookie campaign.

Fast forward to 2018 and Rogers looks the part of a difference maker. On the year, he owns a 2.92 ERA across 61.2 IP. His 9.9 K/9 is a career high while the 2.0 BB/9 is a career low. In a credit to Taylor, he's also handled himself very well against batters from both sides of the plate this season. Seeing 136 plate appearances versus righties, he's given up a .675 OPS. Against lefties in 102 plate appearances opponents have tallied a .439 OPS. Those numbers are both down nearly 100 points from where they were in the same situations a season ago.

Judging by the splits, it's safe to suggest that Taylor can be much more than a LOOGY for Minnesota. The former 11th round pick probably wasn't assumed to be a back end of the bullpen option, but he's certainly pitched himself into the high leverage conversation. Despite not being cut from the blazing fastball cloth, Rogers has turned to pitch quality in order to get big league batters out.

Improving on his pitches as a whole, batters have helped to advance his cause on the mound as well. A 32% chase rate is a new career high, and he is now getting swinging strikes 10.9% of the time (a 3% jump from his rookie season). The former Wildcat is seeing contact against him at the lowest rate of his career, and batters are generating hard contact only 31.2% of the time (which has also led to a career low 6.7 HR/FB).

With Minnesota having transformed the bullpen yet again this year, 2019 is going to be rip with new opportunity. Trevor Hildenberger, Addison Reed, and Rogers are among the few certainties. From there the front office will need to acquire or decide upon internal options once again. Having a guy like Rogers step up into a role that can provide accountability from the get go is a very nice development.

No matter what level of loss is experience during a down season, being able to generate productivity and some level of certainty for the future is a must. Minnesota has a few areas they can point to along that thread from 2018, and Rogers should be chief among them.
Posted by tlschwerz at 10:44 AM