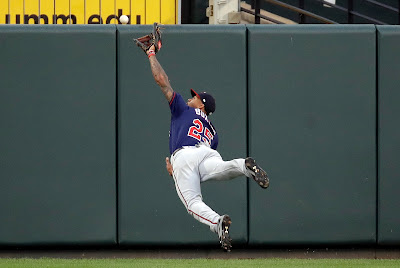 Recently, the team behind MLB's Statcast came up with another visual and defensive metric for our perusal. It's still astonishing to me that the Baseball Savant platform is a free database to the average fan. That's the reality we live in however, and they've now introduced a Directional Outs Above Average leaderboard. In 2018 Byron Buxton obviously isn't on it. Looking back at least year though, the numbers are extraordinary.

MLB.com's David Adler broke down some of his findings using the new tool today on Twitter. Notably, the White Sox Adam Engel has been the most valuable outfielder in baseball this year when it comes to tracking down balls behind him. Quantifying anything above +5 as elite, Engel has tracked down baseballs behind him and to his glove side as good as anyone in baseball this season.

Best OFs this season in each of the six Outs Above Average directions:

That's all fine and well, but the high water mark this year is +5. The Twins centerfielder won the Platinum Glove last season, and watching him play, it was easy to see why. Among players with at least 25 opportunities, Byron Buxton's 29 outs above average was eight clear of his closest competition (Ender Inciate 21). Generating those outs though, Buxton's play behind him is what sets him apart.

Working in centerfield, Buxton generated elite totals (+10 and +7) on balls to the left and right field gaps. With 81 home games a year played at Target Field, getting to baseballs towards the high wall in right center or the bullpen fence in left center, saved his pitcher's ERA significantly. With 20 OAA behind him, only the White Sox Engel came close (owning an 18 OAA mark on balls behind him).

During 2018, the Twins have gotten just 28 games from Buxton at the big league level. Due to injuries, rehab, and now service time issues, he simply hasn't been on the field for a team that took a significant step backwards. Max Kepler has been one of the most consistently available outfielders for Minnesota in his place, and his nine OAA total is quite the dropoff.

As you may expect, this reality has caused quite the problem for the Twins defensively. In 2017 Minnesota outfielders combined for a 24 DRS total, which was good enough for 4th in all of baseball. Fast forward to today and Minnesota owns just a 2 DRS total this season, ranking 17th in the big leagues. There's no doubt it has also contributed to the Twins sliding from 19th to 23rd year-over-year in terms of pitching ERA.

There really isn't anything groundbreaking about the concept that Byron Buxton is an immense talent on defense. That premise alone is why the Twins rushed him back from his initial injury this season, and why they were willing to sacrifice both his health and offensive game for the betterment of their team as a whole. That said, it's plenty refreshing to see new metrics reflect just how exceptional Minnesota's center fielder appears through the eye test.

Getting a healthy Buxton back next season should do wonders for Minnesota, and he should continue to be a best friend for Twins pitchers.
Posted by tlschwerz at 11:27 AM