So...This IS How We Baseball? 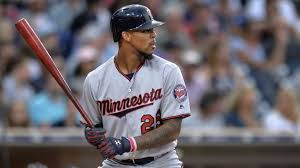 After recently writing a piece at Twins Daily about the Twins doing the unthinkable and playing the service time game with Byron Buxton, Thad Levine came out and said that's exactly what's going to take place. Minnesota's horrible "This is how we baseball" has been mocked all season long, thanks to lackluster performance and confusing decisions, but I really didn't expect something to take the cake in September.

I have been quite vocal about my support of the Twins new front office. Derek Falvey and Thad Levine had a stellar offseasons. They've acquired some very shrewd talent in trades, and they've helped to infuse an organization with new trains of thought. Where I've disagreed, also vocally, has been on the handling of in season roster decisions. Everything from Ryan LaMarre playing in 40 meaningful games, to Matt Belisle being valued for leadership and throwing out ability, to Paul Molitor still looking like a fish out of water when it comes to any form of strategy. All of those situations are trumped by this Buxton decision however.

Thad Levine attempted to prepare us for this self-sabotage by suggesting that Byron was still "playing through" thinks, and Molitor was non-committal when it came to his September plan. When Darren Wolfson dropped the bomb officially though, no amount of preparation helped to ease the lunacy.

Although Levine tried to gray out his obvious admission of guilt when it came to service time manipulation, his quote to Mike Berardino was all that needed to be said, "I think part of our jobs is we’re supposed to be responsible to factoring service time into every decision we make. ... We wouldn’t be doing our jobs if we weren’t at least aware of service-time impacts on decisions we make."

So, now that there's finality to this ridiculous move front the front office, here's shooting down every sensible retort coming out of Twins Territory:

Manipulating service time makes sense, the Cubs did it with Kris Bryant and the Blue Jays are currently doing so with Vladimir Guerrero Jr.

In and of itself, nothing about the above situation is wrong. Garnering extra service time from your elite prospects is something every franchise should look to stretch out. However, comparing Buxton to those situations is one that suggests a lack of understanding surrounding contracts and how baseball development takes places. Uber-prospects having service time manipulated takes place BEFORE they debut at the big league level. Whether trying to stretch out another year of arbitration or avoid Super 2 status, it's in or before major league debuts that this stuff takes place. Byron Buxton was an uber-prospect, but he's currently 300-plus games into his big league career. You aren't manipulating in hopes of what could be coming at this point.

Buxton is actually hurt, and Minnesota wants him to start 2019 healthy.

That's a really convenient avenue for a franchise to take after Buxton missed a large portion of the 2018 season because the Twins didn't care. After breaking his foot, the Twins needed their Platinum Glove winner back so badly that they allowed him to play in 17 games despite an inability to swing without pain. On top of that, Buxton still being hurt hasn't shown up in the box score at Rochester. He owned a .996 OPS since his activation following the wrist injury, and was being asked to play on nearly a nightly basis. Unless there's some injury that occurs when crossing state lines, merit is nowhere to be found on this one.

Has Buxton actually earned anything? He owns the 3rd lowest OPS among MLB hitters with 90 PAs in 2018, and had just a .787 OPS in 35 games for Rochester.

Defining whether or not a player has earned or is owed something is likely a reflection of personal preference. From this vantage point though, healthy players play, and the best ones get the most run. Buxton is an elite outfielder, and is no doubt one of the most important pieces to the Minnesota lineup. He was awful to start the year, and then was hurt for a significant portion of the rest. With a month left to go, allowing a guy to catch up with as many imperative at bats as possible seems like common sense. Sometimes though, those things aren't so common.

Getting another year of team control for Byron in 2022 is more important than a month's worth of ABs during a lost season.

Here's another one that has real merit when viewing the sentiment in a vacuum. Yes, when Buxton is a superstar in all facets of the game in 2022, it'd be great for Minnesota to have contractual flexibility with their player. Unfortunately, the thought that a guy with 300-plus games under his belt needs a reset, has to get going at Triple-A, and isn't worthy of MLB at bats in September doesn't jive with said player being a superstar. In short, if you're worried about how good Buxton is in 2022, then you should absolutely be all in on him being provided every avenue for development in the here and now. Contradiction doesn't get to be separated for the purpose of sensibility.

On top of Derek Falvey and Thad Levine making such an error in judgement, they've continued to double-down with the poor public disseminations. Levine suggested that Byron is still very much a part of the Twins future, and the front office hopes to "make amends" with him soon. It's very true that money talks and a hefty arbitration raise could do wonders for smoothing things over. It's also entirely plausible that Buxton laughs at the thought that the organization is again suddenly looking out for his best interested after entirely screwing him over.

Then there's the manager, Paul Molitor. When addressing the media prior to their game on September 2nd, Molitor suggested it isn't a given that Buxton is the 2019 centerfielder for the Twins. He went on to note lots of competition and a bit more political jargon. Maybe Molitor forgot that this is the reigning Platinum Glove winner, and the best defensive centerfielder in baseball. Jake Cave has been a great addition to Minnesota's stable, but he's not supplanting Byron's future. This also reverts back to the contradictory suggestion that 2022 is an important year of team control, despite a lack of belief in 2019 and beyond.

With Rochester having two games left on their schedule, the resident major leaguer packed up his bags and began his offseason. Byron has become the face of public ridicule for a decision derived from a poor front office decision. He's not bailing on anyone, it isn't a "me first" mentality, and questioning his team attitude is shortsighted. His bosses left him out to dry, and then went on allowing him to twist in the wind as the fruits of their failure come to light.

I'd imagine that Buxton's agents have made calls to the front office already. MLB Players Association Executive Director Tony Clark should be helping Byron to draft a grievance as we speak. This isn't a decision that can come down without recourse, and siding with billionaire owners never should sit right with millionaire players.

At the end of the day, the hope should still be that Byron Buxton turns into the superstar his prospect status alluded to. While that chapter is yet to be written, there's going to need to be a significant amount of relationship capital built back up for the player to trust an organization that no longer looked out for his best interests.
Posted by tlschwerz at 5:12 PM