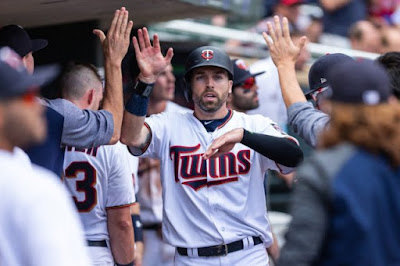 The Minnesota Twins are now in the final week of their 2018 Major League Baseball season. With a Postseason berth eliminated from reality, the final seven games will be of little significance. Given the opponents coming to Target Field include the Detroit Tigers and Chicago White Sox, opportunity to play spoiler isn't present either. That said, these contests remain a proving grounds for players looking to crack the 2019 Opening Day roster.

Right now, there's some intrigue as to whether or not we're witnessing the end of Joe Mauer's heralded career with the hometown team. These could be his final days in a major league uniform, and although I believe he'd be of service to the club in 2019, it appears that no decision has been reached at the present time.

For the guys that are significantly Mauer's junior, they are still looking to make a final imprint on the organization in hopes of vaulting themselves into a more secure position next spring. While the final week may be somewhat of a slog for the battle tested veterans, no opportunity can be taken for granted when looking to stay at the game's highest level.

This season, the Twins have trotted out more than a handful of rookies. Here's a look back at how they've all performed.

Somewhat unfortunately for the organization, Garver was turned loose relatively early this year. Instead of being able to serve as Jason Castro's understudy, he was pushed into a starting role after a knee injury ended Jason's season. While Mitch looked raw behind the plate early on, it's been more than apparent that he made strides as the season went on. Working with veterans like Bobby Wilson, and briefly Chris Gimenez, his glove work improved dramatically.

On the offensive side of this, his .734 OPS was more than welcomed behind the dish for Minnesota. He was easily the most productive offensive asset as a backstop, and there appears to be some legitimate pop in his stick. Over a full season, he's a likely double-digit longball guy, and he's pushed himself into the conversation for more work next season. It remains to be seen if Minnesota will make changes at catcher, but Garver didn't hurt his positioning at all.

Maybe one of the most shrewd moves in the early tenure of the Twins new front office, Jake Cave was acquired as outfield depth from a Yankees system that simply didn't have room for him. With Byron Buxton having a lost year, and Zack Granite falling out of the picture, Cave harnessed the opportunity presented to him.

Early on, Cave should've gotten more run than veteran retread Ryan LaMarre, but that didn't stop him from turning heads on a near daily basis. In 85 games this season Cave owns a .771 OPS and has ripped 12 homers. At 25 years old, he's somewhat of an elder rookie, but there's plenty of reason to believe that this is just scratching the surface. He's easily Minnesota's 4th outfielder to open up 2019, and it's been apparent than he can start for stretches when need be as well.

After over 630 minor league games, Astudillo finally graced Major League Baseball with his presence. The folk tale of a chubby catcher than picked off runners without looking and never struck out came to the big leagues and initially started as an outfielder, third basemen, and second basemen. Now settled into a utility role, and backup catcher, Astudillo has seen regular run down the stretch.

It's just a 23 game sample size, but the .877 OPS is certainly eye opening. It's hard to imagine Minnesota carrying three catches on Opening Day next season, but there's worse ways to use a 40 man roster spot early on in November. This could very well end up being the last we hear of Astudillo, or he could continue to be an out-of-nowhere spark for a Twins team eyeing the Postseason a year from now.

First it was Jose Berrios, and then it was Fernando Romero. When it came to Twins starting pitching prospects, those were the cream of the crop. Romero's electric fastball has pushed him into the conversation of a true ace, and he looked the part in small bursts this season.

The numbers themselves are all unremarkable, and he didn't light Triple-A on fire after returning. That said, the 55.2 IP in the majors as a 23 year old should prove invaluable when setting him up for future success. I'd imagine the Twins front office will be looking to upgrade the rotation again this winter, and that likely keeps Fernando at Rochester on Opening Day, As a first man up however, that's a heck of an arm to turn to.

None of these guys got much time to really cement any sort of significant expectations for the year ahead. Littell, Gonsalves, and Stewart should all open 2019 in the Triple-A rotation, and getting a look at big league talent could do wonders for their offseason preparation. While none of them have dominant stuff, honing in on command and pitchability should continue to remain a key focus for them. Again noting the Twins depth, there's at least one capable big league starter in this trio, and Minnesota having them to turn to next season isn't a bad thing at all.

Vasquez was the lone rookie to get a relief chance this season. Working just 2.0 IP despite entering six games, manager Paul Molitor obviously displayed a short leash. Over such a small sample size you can't draw any definitive conclusions, but it's more than apparent that the meteoric rise from High-A to start the year was impressive. At every level, Vasquez posted massive strikeout totals and tended to keep his walks in check. If he can replicate a portion of that for the Twins, they'll have developed a nice pen piece.
Posted by tlschwerz at 10:25 AM