A Different Advantage for the Twins 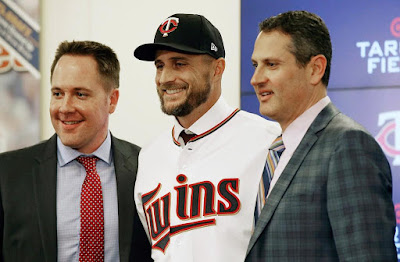 Last summer during a late season Minnesota Twins game Thad Levine sat on stage with Aaron Gleeman during the now annual Baseball Prospectus event at Target Field. There was a myriad of topics discussed but on point stood out to me. The general manager quipped that while Minnesota may not be able to outspend the competition in the form of player acquisition, they were committed to adding talent and spending dollars in other facets of the organization. Fast forward to today, and we’re beginning to see that all take shape.

Recently announced skipper Rocco Baldelli certainly is a step outside of the typical candidate pool. He’s just 37 years-old and has no previous managerial experience. While that is something that would’ve been unheard of years ago, it’s a decision that has become more common recently. Alex Cora just won a World Series with the Boston Red Sox in his debut season, and Aaron Boone faired well with the Yankees out of the same division. It’s not just the managerial role that the Twins have committed to a different structure though, and it’s felt throughout the organization.

Behind the scenes Minnesota has beefed up its analytics department, adding bodies in the front office that should be expected to push the needle. Formerly of Baseball Reference, Hans Van Slooten was brought into the fold prior to the 2018 season. A glance through his timeline will highlight the multiple intern, baseball operations, and baseball research positions the organization has committed to. It’s not just off the field talent though, and that has really played out as Baldelli’s staff has been named.

After working with the Twins as an Advance Scout, Jeremy Hefner has been added to the field staff for 2019. He’s just 32 years-old and was pitching professionally as recently as 2017. Despite a lack of coaching experience, he has been named the Assistant Pitching Coach. The man he’ll be working next to is green in the big leagues as well. Wes Johnson was plucked from Arkansas after a successful stint with Mississippi State. He’s well regarded as a forward thinker using TrackMan and Rapsodo technologies, as well as being billed a velocity savant.

On the diamond during play, Tony Diaz joins the Twins organization at the age of 41 after holding a base coaching position with the Colorado Rockies last season. Tommy Watkins is just 38 and joins the field staff after serving as a minor league manager and drawing rave reviews from all those he interacted with. Bringing both diversity as well as youth to the highest level of Twins baseball, there’s a very visible shift in dynamics taking place here.

It was assumed that Paul Molitor would’ve been on his way out following the 2017 season had he not won Manager of the Year. Not handpicked by the front office, the collective obviously had plans of how they wanted things run and see those interacting with players as an avenue to get more production in the box score. Looking at how this new staff has been filled out, it’s plenty apparent to see that Molitor (by no fault of his own) wasn’t anywhere close to the ideal profile.

From a top down view, and before the games begin to matter, it’s plenty fair to suggest that this whole blueprint has a very real chance to go up completely in flames. With so many coaches lacking experience at this level, and youth being a very common thread among them, it will be necessary to overcome hurdles in the process. However, the Twins are very clearly going out on a limb in the vein of innovation. If their competitive advantage isn’t going to come through outspending, looking to exploit market inefficiencies is a very astute way to go about gaining ground.

We will still need to see if everything comes together and this formula ends up being worthwhile. That said, innovation doesn’t happen for those unwilling to take the first step, and the Twins front office has committed to a process that bucks the trend of retreads being selected as new hires first. Investing in the opportunity to pioneer a new process, and hopefully benefit both the 25-man active roster as well as the organization, the Twins could certainly be venturing down a path that helps to ever-so-slightly tip the scales in their favor.

There’ll come a point in which we can look back and judge how it all worked out, but that remains at least a couple of years in the future right now. Reasoning and process alone make this plan appealing, and there’s little reason to cast aside the hope that it works.
Posted by tlschwerz at 9:07 AM