A First Basemen with Familiarity 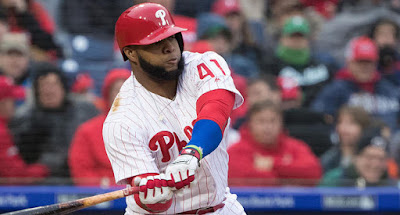 On Monday morning the legendary career of Minnesota Twins great Joe Mauer came to an end. While it's obvious that his exploits behind the dish were far superior to what he did at first base, the reality for Derek Falvey and Thad Levine is that they now have a hole in their infield. Heading into free agency the first base market is pretty ugly, but a familiar name could make a ton of sense.

Last winter Carlos Santana signed a three-year, $60 million pact with the Philadelphia Phillies. Now according to Ken Rosenthal, they are "shopping the hell" out of their newly acquired first basemen. Of course the optics of such a move don't look great for the Phillies, but there's much more to it than meets the eye. Everything boils down to the fact that Rhys Hoskins is a bonafide stud, but he cannot play in the outfield. Serving as the regular left fielder last season he was worth an abysmal -24 DRS. The best configuration for Gabe Kapler's squad has the young star back at first base.

For the Twins (and any other suitors) there's somewhat of a perfect storm brewing. Santana had a down year in 2018 (not terrible however), and his team is motivated to move him before the start of the 2019 season. With those two factors at play it'd be fair to assume that leverage may be on the side of the acquiring ballclub. At 33 next year, Santana is owed $20.3MM with a $20.8MM commitment in 2020. There's a $17.5MM team option for 2021 but the buyout is a measly $500k. For teams interested in corner infield help, Carlos Santana at two-years and $40 million doesn't sound like a bad ask. Trading prospects and taking on the deal though, you're probably looking at asking the Phillies to eat something in the range of $10 million.

Right now you'd like to believe that the Minnesota Twins have Miguel Sano inked at third base to open 2019. A position change across the diamond could be in the not-so-distant future, but keeping him in his current role as long as possible is the most optimal scenario. As he transitions across the diamond though, a sort of mentor could be a great addition to the process. Santana has dabbled at third base in both 2014 and last year. He knows the position well enough to understand Sano's process, and Carlos has been a league-average at worst first basemen since coming out from behind the plate.

Offensively there isn't a box that Santana doesn't check for the Twins. Sure he had a down 2018, but even that included a respectable .766 OPS. In his final two seasons with Cleveland (yes, not the Falvey connection) Santana owned an .842 OPS. He has a career .363 OBP and has routinely split walks and strikeouts at the dish. With three straight seasons of at least 23 homers the ability to lose the ball in the seats is also present. Of course the best ability is availability, and Santana has been incredibly reliable as a big leaguer. Dating back to 2011, he's played in no less than 143 games and has gotten in 152-plus in all but one of those seasons.

Despite playing Gold Glove caliber defense at first base dating back to his positional change, Mauer's greatest detraction on the right corner was the ability to hit for power. Santana brings that to the table, combining his efforts with Sano on the other side. Minnesota's lineup also needs an infusion of on-base ability as Joe (and likely Robbie Grossman) has been subtracted from the mix. On paper this is certainly a perfect fit.

According to 1500 ESPN's Darren Wolfson, Santana is "on their radar" and that's a great sign for Twins fans. While the Phillies are motivated to move him, this is a team considered front-runners for one (or both) of Manny Machado or Bryce Harper. They aren't going to take pennies on the dollar and Carlos' services will be coveted by more than a few clubs. If there's a deal to be made in Minnesota this offseason involving prospects however, this is the one I'd like to see get done.
Posted by tlschwerz at 6:59 AM