Robbie Nearing His End in Minnesota? 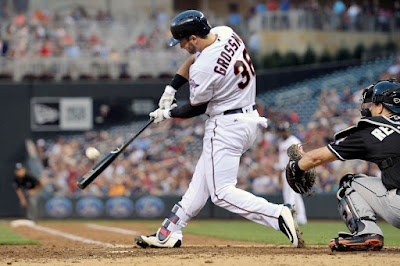 By Friday the Minnesota Twins will need to decide if they are going to tender contracts to all their arbitration eligible players. The names include guys like Kyle Gibson, Eddie Rosario, and Miguel Sano. Among the ten possibilities, nine of them are near-certainties. If there’s a guy with an uncertain future however, it’s none other than Robbie Grossman.

Grossman came to the Twins in 2016, under the Terry Ryan regime, after opting out of a minor league deal with the Cleveland Indians. His career had sputtered with the Houston Astros and never really got off the ground. That 2016 Twins team was a bad one (103 losses), and Grossman was brought in for depth purposes. The day after his acquisition, Eddie Rosario was demoted to Triple-A and Grossman made his Minnesota debut on May 20.

Robbie’s first season with the Twins was a coming out party. Despite being on a team playing terrible baseball his offensive production was a bright spot. At 26 years-old he’d eclipsed prospect status, but posting an .828 OPS doesn’t get glanced over, and he was every bit the on-base machine expected of him. Now looking back on his production, the narrative hasn’t changed much. In 347 games with the Twins Grossman owns a .711 OPS buoyed by a .371 OBP. Offensively, he’s a guy that has a little pop, takes strong at bats, and gives opportunity to the hitters surrounding him in the lineup.

Unfortunately, the offensive prowess is where things end for Grossman. As good as he was in 2016 at the plate, the defensive output was enough to make either Delmon Young or Josh Willingham blush. Being worth -21 DRS with a -13.8 UZR in just 637 innings is nothing short of an abomination. Spending his time patrolling left field for Paul Molitor’s club, there’s no arguing that his abilities in the outfield aided heavily into such a terrible year.

Being used more sparingly in 2017, and then making improvements in 2018, Grossman does deserve somewhat of a pass on such an outlier of a year during his debut in Twins Territory. The reality however is that Robbie isn’t someone this Twins squad wants in the outfield, and it’s arguable as to whether any big-league club would see that as an ideal fit. Without a real defensive position, that’s where things get a bit dicey.

MLB Trade Rumors projects Grossman’s arbitration value at $4MM. That number isn’t a significant amount in the landscape of salaries today, but it’s also one that makes him more than expendable. Serving primarily as a designated hitter or bench bat, there’s likely better out there equal to or lower than that valuation. The Tampa Bay Rays just DFA’d C.J. Cron coming off a 30 HR season and an .816 OPS. Both players made similar figures in 2018, and Cron is a capable defender.

Knowing that the Twins are looking to upgrade their corner infield spots, have depth in the outfield (and recently acquired another OBP guy in Michael Reed), and have some desire to bring in thump to the designated hitter role, there’s plenty of factors working against Grossman. If this is the end, and it’s trending that way, it’s hard to look back at the tenure and not be happy for both sides. Grossman jumpstarted a career that failed to launch, while the Twins got a bat for the lineup that proved more serviceable than anyone could’ve imagine. At some point we all become expendable as the scales tip in favor of opportunity cost. Grossman will find work and the Twins will fill his role. Going forward, there’s just not the same ideal fit.

Posted by tlschwerz at 9:47 AM