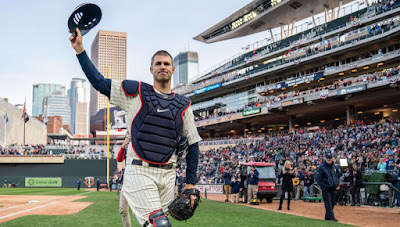 Sitting in the Charleston International Airport at 12 pm eastern time, I grabbed my phone and watched as Joseph Patrick Mauer delivered a 17 minute speech to announce his retirement from playing professional baseball. This is a man who had been in the Minnesota Twins organization for nearly 20 years, and spent 15 seasons at the Major League level. Sandwiched between two magazine covers emblazoned with his image, there was nothing left to say except, "Well played, Mauer."

For two straight seasons, in 2010 and 2011, Sony used Joe Mauer as their coverboy for the popular MLB The Show franchise. On the heels of his 2009 Most Valuable Player season he was the focal point of a limited Nike shoe and countless commercials to promote the game. As the premiere virtual offering to baseball fans around the world, the iconic line "Well played, Mauer," grew plenty of steam. As the dust settles it's incredible how fitting those three words were.

At this point we know that the incredible year peak will be his calling card to the Hall of Fame. Three batting titles (a feat in which no other catcher in 118 years of American League Baseball has accomplished once), six All Star games, three Gold Gloves, five Silver Sluggers, and an MVP in tow, the resume is impressive in and of itself. That alone doesn't define the career of the Minnesota Twins legend however. Mauer's reach was felt far beyond his impact behind the dish.

Being the incredible athlete he is, and one that could've been a first round NFL draft pick or likely selection in the NBA draft as well, Joe adapted better than anyone could've expected. Following his career altering brain injury he transitioned to a new position and was snubbed of a deserved Gold Glove there. Despite being miscast as a power hitter due to his incredibly 2009, the leadoff prowess always displayed through his on-base skills only gained momentum as his tenure drew on. Regardless of what he set out to do, Mauer played it, and well.

Through all of the accolades, thanks, and tears Joe displayed up on that stage there was one statement that got me the most. During the media portion of his press conference Mauer was asked how he wants his legacy to be remembered. This is one of the most decorated Minnesotans ever; a guy that did it all at the highest levels. If there's a loaded question with the ability to draw out an answer filled with never-ending glory, that one was it. His response, "Respect, and the way I played the game."

All of the time I find myself suggesting that athletes, celebrities, and public figures are not people to look up to. They're human, have faults, and are unnecessarily placed in the spotlight. This man however, gets it at every level. The last playing embodiment of the legendary Johnny Bench, Joe Mauer wanted his legacy to revolve around respect and the way in which he carried himself. In a landscape starved for great human beings, we didn't deserve what Joe Mauer gave us.

The clock now begins, with 2024 being the first time Mauer is eligible for enshrinement into Cooperstown. We'll have to wait and see how the vote shakes out, and it may take a few tries, but make no mistake that the St. Paul native will be the fourth member of the city voted into the Major League Baseball Hall of Fame. In the meantime, we'll need to look back with fondness of what was, and enjoy the continued involvement of a man that has given of himself in every avenue possible.