The Case for Cutch 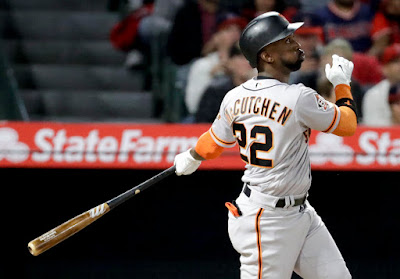 Going into this offseason the Minnesota Twins have some very clear needs. Deciding what to do in the infield, and adding a few relief arms are chief among them. If there's a position that isn't immediately on the radar it's adding a body in the outfield. That being said, we don't know what the offseason will bring, and there's a free agent of intrigue on the market.

After being the 11th overall pick by the Pittsburgh Pirates in the 2005 Major League Baseball draft, Andrew McCutchen spent the first nine years of his big league career with the same organization. Traded to the Giants prior to 2018, he was then shipped to the New York Yankees down the stretch. This isn't the same perennial MVP candidate that Pennsylvania natives came to love from 2012-2015, but there's something left in the 32 year-old's tank.

At 29 in 2016, there was a real fear that McCutchen was hitting the skids and looking at the downside of his career. A .766 OPS and awful centerfield defense brought plenty of questions heading into the 2017 season. He responded by moving to right field and putting up an .849 OPS which was bolstered by a near-career high home run total. 2018 saw Cutch post a .792 OPS that was buoyed by a strong .368 OBP and a very nice 25 game stretch for the Yankees.

Coming off a $14.75 million salary in 2018, and a long term deal with the Pirates, McCutchen gets to test the waters for the first time in his career. His market will be interesting, but I'd think that logic suggests years may be the greater focus than a high AAV. If he could be had for something like three years and $30 million you'd certainly find teams willing to play the role of suitor.

With Byron Buxton, Max Kepler, and Eddie Rosario in tow for the Minnesota Twins there isn't an immediate opening. However if I'm Derek Falvey and Thad Levine, two of those players should absolutely be made available on the trading block. Max Kepler likely has the lower value at the moment given his statistical output, but I'm fine in believing he could end up being the superior player.

In 2018 Eddie Rosario was deserving of being Minnesota's representative at the All Star game. He was on fire in the first half and finished with an .803 OPS. Playing in 138 games, he displayed power and production at the plate. From where I sit however, I think we're seeing the absolute peak of what Rosario can bring to the table. If there's a partner out there willing to match the Twins asset with real value, that's a guy to move with certainty.

Never mind that despite the All Star caliber start, Rosario put up lower numbers in 2018 than he did the year prior. His plan at the plate has always been to work as a bad ball hitter, and that didn't change last season. He chased 43% of the pitches he swung at, and he whiffed nearly 13% of the time. On top of that, his walk rate remained at an ugly 5%. When the lumber connects things go well, but that's a trio of numbers just begging for a chance to fall off the table.

Since his debut, Rosario's outfield defense has also taken a dip. As a rookie the outfield assists piled up and were a number to recognize. While his arm strength is a known commodity at this point, he sees himself tested less. Although he did perform positively in 2018, there's still more than a handful of blunders due to routes and decision making that have negative impacts on the scenarios at play.

Make no mistake, there should never be a suggestion to move a 27 year-old Rosario for a 32 year-old McCutchen. Looking at how this could play out however, we aren't operating in a vacuum. If another team wants to bring Rosario on board in exchange for pitching help or something of equal value to the Twins, it's a swap that needs to be heavily considered. At 27 Rosario isn't a kid anymore, and his approach doesn't lend itself to production heights much higher than what we've seen. If the Twins can cash in before things go belly up, it'd be a move you'd need to applaud.

The front office needs to inject this current roster with a bit of leadership, some significant on-base prowess, and talent that can challenge the Cleveland Indians in the very weak AL Central. There's more than one way for them to get that done this winter, and it will be interesting to see how it all takes place.
Posted by tlschwerz at 6:54 AM