Bring on the Boomstick 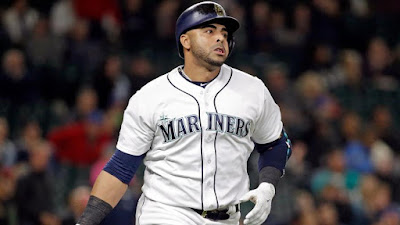 With the Winter Meetings well underway, signings and reports are flying in from every direction. The Minnesota Twins made their initial splash with the acquisitions of Johnathan Schoop and Ronald Torreyes. Now having the middle infield gaps covered, some thump in the lineup can be addressed. Rocco Baldelli’s projected starters have plenty of power at their disposal, but none look the part of true on-base threats. Nelson Cruz would change that.

On Tuesday evening Hector Gomez reported that the two teams left vying for the services of the former Seattle Mariners DH are the Twins and Tampa Bay Rays. Cruz hits the market as a 38-year-old that will be playing 2019 at the age of 39. Despite nearing his forties, there doesn’t yet appear to be much slowdown in terms of production. During 2018 with Seattle, Cruz watched his average dip to .256 (a career low), but it was bolstered by an .850 OPS and 37 homers.

There wasn’t ever a point in his career that Cruz was an ideal outfielder, but at this stage in the game he’s become a full time DH. Luckily with the Twins, there’s no need for him to ever be inserted into the outfield. On the premise of his bat alone, Cruz is among the most intriguing names for Minnesota to consider offensively. Dating back to 2014, he’s hit no less than 37 longballs, and he’s had a .356 OBP over that stretch.

Right now, Jorge Polanco looks destined to be the leadoff hitter for Baldelli, and some combination of Miguel Sano, C.J. Cron, and Eddie Rosario will fill out the top half of the lineup. That group has plenty of ability to lose balls in the seats, but Polanco’s .325 OBP over the past two seasons paces them. As baseball has trended towards the launch angle revolution, and adaptation for power, a remaining necessity to get on base is ever present. Even if everything breaks right from a homer standpoint for the current Twins group, there stands a reasonable expectation that many of them could be hollow, solo shots.

It’s not just on-base skills that make Cruz an ideal candidate to join the Twins clubhouse, however. As a veteran who has not bounced around, he’s been someone that no doubt displays a certain presence within the clubhouse. Minnesota has been big on veteran leadership surrounding their young and upcoming stars in recent years, but that role has often been filled with aging players offering little value (Torii Hunter, Matt Belisle, etc.). In Cruz, Baldelli gets a Spanish speaking veteran than can lead by example for many of the impressionable minds he’s looking to mold. Doing so by example on and off the field must have a bit more merit.

There’s little doubt that Cruz is approaching the end of his time as a professional ballplayer. Whether that means three years or five years, age always wins out. At this point in time there isn’t much reason to believe the production will dip, and that should calm any fears of agreeing to a one- or two-year deal. He’ll get paid a hefty sum, but with the open cash flow that the organization has, there will still be plenty of dollars to allocate towards pitching.

Whether this pact gets done while the Twins contingent is in Las Vegas or not remains to be seen, but it would be hard to swallow a scenario in which Minnesota was just “in the hunt” again. There’s not going to be a long-term commitment here, and the dollars won’t be a showstopper. There’s a serious fit from multiple angles, and a deal is something Derek Falvey and Thad Levine should be adamant about.

Posted by tlschwerz at 7:42 AM