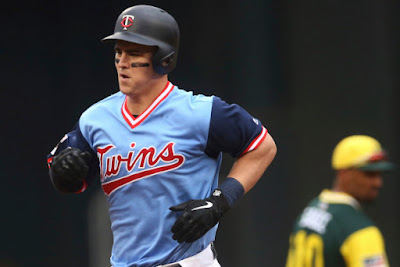 In one of their first moves this offseason, the Minnesota Twins plucked C.J. Cron off waivers after he was jettisoned by the Tampa Bay Rays. Following a 30-home run breakout campaign and having established relationships with the likes of Rocco Baldelli and Josh Kalk, the slugging first basemen seems like a decent gamble. What’s worth wondering though is whether Cron slots in as Joe Mauer’s replacement, or just another body on the 25 man. No matter what his role, the Twins do have Tyler Austin to worry about, and what’s next could be described as some uncertainty.

The Twins acquired Austin and pitching prospect Luis Rijo in exchange for Lance Lynn at the 2018 trade deadline. After seeing little playing time with the Yankees over the past three seasons, Austin got in consistent run with Minnesota down the stretch. From August through the end of the season, he played in 35 games for Paul Molitor’s club. His .782 OPS was a career best, and the nine longballs were also reflective of his power stroke. Now recently turned 27 years-old Austin looked to be in line for an expanded role with the Twins, but that may not be guaranteed.

Projecting the possible roster openings, we can guarantee that nine players fill out the lineup with another five in the starting rotation. A 13 man pitching staff has been customary for the organization of late, so an eight-man bullpen also seems probable. In that scenario there’s just three bench spots up for grabs, likely taken up by backup catcher Mitch Garver, utility man Ehire Adrianza, and fourth outfielder Jake Cave. At this point we’ve yet to consider Austin’s place meaning he’d need to start at either first base or designated hitter.

Although the Twins aren’t locked into Cron to start the season, a $4.8 million deal tendered to the former Ray suggests he’s in their plans. Whether that means he starts at first base or takes the bulk of the designated hitter reps remains to be seen. It would be my hope, and a logical expectation, that Minnesota is not yet done adding bats. Obviously, Jorge Polanco needs an up the middle partner, but a higher ceiling fit for first or DH still has plenty of promise. The duo of Cron and Austin would be passable, but the front office would also be plenty open for criticism if such a low reward avenue was embarked upon.

Next week the Winter Meetings commence in Las Vegas and we’re almost certainly (err, hopefully) going to see the free agent market pick up. Minnesota may let some of the chips fall first, but they’ll need to fill the necessary holes (middle infield, bullpen) at some point. Another bat entering the picture would only further signify what could be a suboptimal development for the one-time Yankees prospect.

For a guy like Austin these situations are never ideal. We saw him produce at a higher level down the stretch when given consistent playing time. He’s out of options however and could be up against a numbers crunch in a position Minnesota stands to benefit from improvement. A Cron and Austin tandem in the lineup would signify somewhat of a disappointing effort to acquire talent, but an improvement could make the stay in Twins Territory a quick one for Tyler.

Posted by tlschwerz at 9:38 AM