The Dangers in Waiting for Minnesota 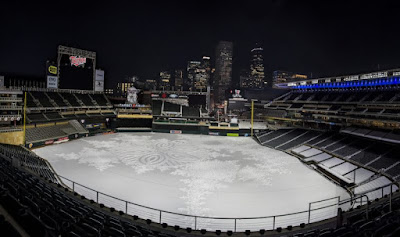 We’re quickly approaching the close of the 2018 calendar year. While there’s still multiple months before Spring Training commences in sunny Fort Myers, the Minnesota Twins talent acquisition has come in the form of two moves. Both players found themselves on the free agent market by way of non-tender decisions from their previous ballclubs. We saw a patient strategy in 2017 but employing it again could be to the team’s detriment.

Despite how the Lance Lynn and Logan Morrison signings worked out for Falvey and Co. last offseason, there’s no denying that both moves made a ton of sense. Morrison represented a power bat the lineup could certainly use, and Lynn allowed the starting rotation an ability to be bolstered by one of the premiere names on the market. Both players were inked to team-friendly dollars, and there’s no such thing as a bad one-year deal.

It appears that the Twins are content employing a similar level of patience this time around. The problem, however, is that the circumstances had them in a position ripe to jump the market. We’ve heard that a $100 million payroll could be the bar to clear, and much has been made about the uncertainty of both Miguel Sano and Byron Buxton’s development. The former is a number that should represent an embarrassing effort towards competitiveness, while the latter strikes this blogger as a backwards way of thinking.

Right now, we’ve yet to see Sano and Buxton put it all together over a consistent period. Minnesota obviously has reservations about whether it will happen for the two former top prospects but planning for anything other than full speed ahead comes with quite a few issues.

First, Sano and Buxton will never be cheaper than they are right now. Whether they explode or not, arbitration raises will continue to increase their rate of pay. Should things go according to plan, the dollars will mount considerably in the next few seasons. Waiting for the next wave of prospects would signify something like a ten year rebuild and comes with the same caveats as to whether the prospect status matures at the highest level. Pairing the current duo with external talent is also just a drop in the bucket in terms of dollars at this point, and nothing hamstrings an organization with zero dollars committed to 2020 and beyond.

You can certainly look at the free agent landscape as it stands today and wonder where those extra dollars would be spent. Craig Kimbrel isn’t the most appealing reliever at his ask, and Bryce Harper probably wants little to do with Minnesota. However, we’ve heard about plenty of relievers that the Twins were in on to this point and they simply didn’t want to extend a second year. These are the avenues that strike me as poor planning. Outpacing the competition by showing a willingness for an extra season, or a few extra millions, is something this team is in the perfect position to do. The Twins shed a ton of salary prior to 2019 and have literally nothing on the books for the season after. By being aggressive on some second-tier names, there’s no denying the impact could have been felt in the wins column. At this juncture, there’s a dwindling list of those types left, and the suitors remain a vast and competitive field.

As referenced from the get-go, there’s still time left to sort this all out. If Nelson Cruz, Cody Allen, and Zach Britton all end up in Twins Territory the panic button can be put away. When C.J. Cron and Jonathan Schoop are joined by the like of a Zach Duke or Matt Belisle type however, we’ll be vindicated in wondering what was taking place at 1 Twins Way.

Regardless of any team’s payroll flexibility, it’s always fair to view deals through a sensible market value meter. That said, there’s nothing wrong with being the aggressor in acquiring talent when you have resources on your side. For years the Twins have been in a situation that extra spending didn’t make sense because a level of competitiveness wasn’t going to be impacted by anything but a total overhaul. Now is not that time, and each additional acquisition can play a key part in a result greater than expected.

Waiting for something to fall into your lap has its purpose, but dictating your future often bears greater fruits.

Posted by tlschwerz at 6:31 AM