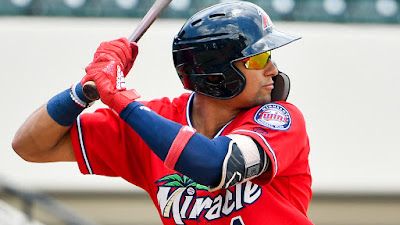 We’re amid the Winter Meetings, and the Minnesota Twins are putting together their active roster for the 2019 Major League Baseball season. Having turned the page on a less than stellar year, an overhaul of the coaching staff puts Rocco Baldelli as the new man in charge. Although the Twins have yet to break through at the top of the AL Central to this point, the hope is that they’re not far off. If that’s going to be a sustainable reality the farm system will need to bear fruit.

Last touched mid-way through 2018, my top 15 Twins prospects is due for some updating. If you’d like to see where things stood then, look here. Below you can also find the Top 15 Prospect lists dating back to 2016. Entering the 2019 season, here’s how the list shakes out:

Minnesota acquired Alcala when dealing Ryan Pressly to the Houston Astros in the middle of the 2018 season. He got in 20 innings with Double-A Chattanooga last season and it didn’t go great. The strikeout numbers were there, which isn’t a surprise for a guy who can threaten triple digits, but command became a larger issue. He’s still working as a starter, but the transition to relief could happen as soon as 2019. He’ll be 23 this season and could be an asset in late inning relief work for the Twins. As a guy who was acquired in exchange for Pressly, dominant relief work would be the situation coming full circle.

It was Logan Forsythe that was acquired to replace Brian Dozier when Minnesota struck a deal with the Dodgers. Raley was the prospect that looked the most intriguing in the package though. He’s getting old for his level now at 24, but he should start at Triple-A in 2019. Brent Rooker is the prospect that gets the power fanfare, but Raley is looking like he should be in that conversation as well. There’s plenty of swing and miss here and refining the approach at the dish is a must, but he could profile as a fourth outfielder or nice bench bat going forward.

The other part of the Pressly deal, Celestino is just going to be 20 in 2019. He played in rookie ball for Minnesota last year, but a progression to Cedar Rapids for the year ahead makes sense. Celestino held his own in the New York Pen league while in the Astros system, and driving an OPS back up around .800 would be a very nice development. He’s raw and yet to fill out, but this is a prospect worth monitoring.

Picked from the Diamondbacks system when the Twins sent Eduardo Escobar to Arizona, Duran has plenty of exciting peripherals. He put up a highlight reel after joining Cedar Rapids, and his strikeout numbers only continued to rise. He’ll likely move up to Double-A at the beginning of 2019 and getting a guy that may have had his minor league breakout last year is an exciting add.

It was Enlow that was the beneficiary of some shrewd draft strategy by Minnesota in 2017. Despite going in the 3rd round, he was a targeted draft pick and with good reason. He played all of 2018 at Single-A Cedar Rapids despite being just 19, and the numbers were plenty respectable. He did miss some time, but that’s not abnormal for a kid in his first full pro season. He needs to continue developing and the hope would be the strikeout stuff continues to play. Enlow has a shot to be a mid-level or better piece of the rotation.

Having returned to the mound in 2017, Thorpe turned in his first full season since 2014. With the injuries and illness behind him, he threw over 100 innings for the first time in his career. Although he’s a lefty, Thorpe isn’t just a soft-tossing contact pitcher. With strong command of his arsenal, he posted nearly 11 strikeouts per nine at both Double and Triple-A last season. Expecting him to be a depth option for the big-league club in 2019 is more than realistic.

Without a missed season, Javier is probably even higher on this list. Signed out of the Dominican Republic, Javier has been one of the must-see type prospects in the system for a while. He underwent Tommy John surgery and missed all of 2018, but he will be healthy when 2019 kicks off. Javier showed well in his Appy League debut during 2017, and as he fills out, should only become more exciting.

I’ve raved about Baddoo at different times in this space. His body has matured greatly, and he did a great job as a regular for the Kernels in 2018. Although his average wasn’t where it sat during rookie ball, the .770 OPS continues to be reflective of a guy with great plate discipline. He takes a ton of walks and started to show power with the muscle he’s put on. Baddoo is quick enough to stay in centerfield but could profile as a bopper on the corners as well. This is an exciting mix of tools to monitor.

Although lacking some of the power Baddoo may possess, Wade is another guy that can play all three outfield positions and does a great job getting on base. He owns a career .391 OBP in the minors and forces pitchers to work in order to get him out. He probably won’t start 2019 in Minnesota, but he could claim a spot as soon as needed. This is a non-switch-hitting Robbie Grossman with a much better glove.

We could’ve been writing a different story here had Gordon’s 2018 continued like it did at Double-A Chattanooga. Through his first 42 games of 2018, the former 1st round pick has a .906 OPS and was on his way to Triple-A. Nothing went right in Rochester, and now both Johnathan Schoop and Ronald Torreyes have been brought into the mix. The goal would be for Gordon to still take over for the Twins up the middle, but that will come after a level of mastery in Rochester is shown.

Picked by the Twins following a College World Series victory in June 2018, Larnach made it to Cedar Rapids in his professional debut season. Positing an .890 OPS split between two levels, Larnach’s bat has always been his calling card. He isn’t a centerfielder, but there’s no reason the glove won’t be good enough for the corners. As with all power guys, a strikeout tendency could be a worry, but Larnach’s 28/21 K/BB in his first 42 games is a great jumping off point.

Slow starts can be doom and gloom for some, but Rooker turned it on after stumbling out of the gate. He finished with a .798 OPS at Double-A in 2018 and posted a .900 OPS for a matter of months. He swatted 22 homers and all the comments regarding how much power he possessed were absolutely for real. It sounds like there’s no belief he’ll have the footwork to play first base, so he’s a left fielder or DH at this point. That said, he was drafted as a quick mover and highlighted for his bat. Minnesota could call upon him in 2019 and I’d expect him to be more than ready.

Following in the footsteps of Fernando Romero, Graterol is the next Twins fireballing prospect. There is some reason to believe he could end up in the bullpen, but if he harnesses his skills as a starter, he’s a top of the rotation guy. Making it to High-A Fort Myers as a 19-year-old is no small feat, and he had little problem laying waste to hitters quite senior to him. The fastball sits near triple digits, and he’s yet to experience much issue with walks. If there’s a Twins ace of the future, it could be Brusdar.

Known as a bat first prospect out of high school, it was unfortunate to see Kirilloff miss a year of development due to injury in 2017. You’d be hard pressed to believe action wasn’t seen in a year after the 2018 he had, however. Splitting 130 games equally between Cedar Rapids and Fort Myers, Kirilloff owned a ridiculous .970 OPS. He posted 20 homers and owned a .392 OBP. The Pittsburgh native has all the makeup you’d want, and the tools on the field take it to another level. He’ll enter 2019 as one of the best prospects in the game.

Maybe the only thing to slow the Royce Lewis hype train in 2018 was the season Kirilloff had. On his own however, the 2017 1st overall pick looks every bit as good as hoped. On top of being an incredible human being, he should enter 2019 as one of the top three or four prospects in all of baseball. His defensive ability has taken steps forward at shortstop, and his .803 OPS was more than impressive for being his first full year of pro ball. There’s no reason to expect a trip to Pensacola for Double-A won’t be in short order, and a future Twins superstar could emerge from there.