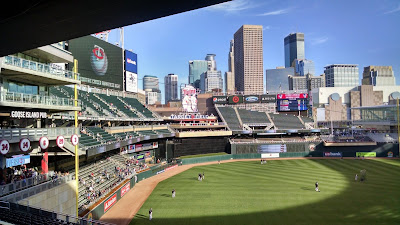 We’re about to close the book on one of the craziest years in my lifetime. At 30 years old, I’ve hardly seen as much as the next person, but to say this calendar was filled with unprecedented events would be putting it lightly. Through it all though, we had baseball, and that was a distraction I know that I needed.

I remember many months ago now, waking up from a nap and looking at my phone. There was an alert from ESPN noting that Kobe Bryant had died in a helicopter accident. As I processed that, it didn’t hit me as to what the magnitude I’d feel from that event would be. Kobe was a cultural icon, more than just a basketball player, and despite being a Jordan guy he was an athlete I respected. From there, things got worse.

I’ll never forget sitting in Pott’s Sports Café in Fort Myers, Florida on March 13. The night before Rudy Gobert had tested positive for Coronavirus and the NBA effectively closed its doors. Covering the Twins Spring Training, things seemed ominous that morning as teams had already gone to distancing fans from players with roped off areas. By noon, Major League Baseball had put a halt on all operations. I hopped a flight and headed home.

Since that day, I have not returned to the office for my day job. We’ve dealt with closings of restaurants, public spaces, wearing masks, and plenty of other new versions of normal. Minneapolis experienced extreme racial unrest as the city turned into a warzone. There’s been political and social unrest, and countless other prominent figures that have now left us. For a brief four-month period though, there was baseball.

Leading up to the regular season we watched as the commissioner and ownership groups publicly tore down their players in an effort to squeeze profits through what would be a different year. There was uncertainty as to whether a season would be played at all and writing about the sport took a different turn. There was no minor league action to cover, and in months there typically would have been action, an ability to get creative was necessary.

As the dust settled though, we had the resumption of a game. Teams were diligent in their efforts to avoid Covid-19 outbreaks, the play on the field checked in at a high level, and the Los Angeles Dodgers won a World Series. Back in early summer, none of that seemed remotely possible.

More than any other year, I needed this out. I lost my grandpa to cancer in August, and the day following his funeral my 59-year-old father died in a car accident. I’ve spent more time in a cemetery over the past three months than I have during the entire duration of my life. I know that my challenges in 2020 are not alone, and that this year has been trying on so many. Financial distress, learning to cope with new working situations, understanding how to handle a certain level of social isolation, the totality of it all is not lost on anyone.

At the end of the day though, it was this, a child’s game, that provided a reprieve. We’ll have baseball again, the world will heal, and we can all be better and stronger people for what we have overcome. It will forever be a passion to break down the effectiveness of Jorge Polanco at shortstop, or whether Jose Berrios will round into a bonafide ace. Even if you take away that type of consumption though, the purity of a game, the crack of the bat, and the smell of fresh cut grass will always be an inviting escape.

Thank you for venturing on this journey with me, and I look forward to a more consistent level of normalcy in the months ahead. Below you’ll also find some of my favorite pieces from this season.

Posted by tlschwerz at 7:37 AM