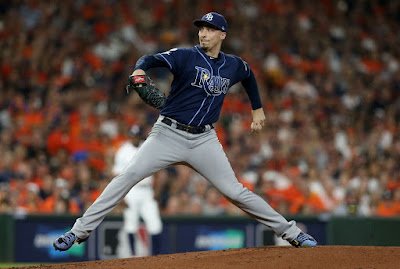 Update: It appears that the Padres will be also landing Yu Darvish from the Cubs. While that takes a target away from the Twins, they have less competition on the Reds front. Arms like Joe Musgrove and Jon Gray also remain enticing.

Late on Sunday night the market for starting pitching pursuits took a drastic change. After the Tampa Bay Rays had announced they’d make Blake Snell available, the San Diego Padres decided to cap off their Christmas weekend with a blockbuster trade. This provides a blueprint for the Minnesota Twins, and also removes some potential competition.

Thus far during the offseason things have been quit from the Derek Falvey and Thad Levine camp. Minnesota has made a few smaller moves on the reliever front, but they have not addressed their rotation or lineup. For what seems like weeks we’ve now heard about the Twins being a team potential waiting in the weeds and ready to strike. One big name discussed has been that of Marcus Semien, but it remains true that starting pitching is a must.

You can probably bet on veteran Rich Hill not being a guy brought back for 2021, and while Jake Odorizzi looks like one of the best arms not named Trevor Bauer, he will have some options. For Minnesota, sustainability could be the key and finding a trade partner with an arm having some team control could be as enticing as anything.

Although it’s not known to what extent Minnesota may have been intrigued by Snell, the reality is he’s a good pitcher and was available. At the very least that made the two organizations a match. Following that logic, the Cubs and Yu Darvish as well as the Reds and their arms Luis Castillo or Sonny Gray could all be fits. Darvish comes with the hefty price tag, while both Gray and Castillo are more affordable options that should command a premium in prospect capital.

It’s fine to still call this relatively early in the offseason, but the reality is that we’re over the halfway point. Despite the fact that Rob Manfred still hasn’t solidified the 2021 Major League Baseball schedule and we still have no idea what the exact set of rules are going to be, time is not waiting, and Spring Training will soon be around the corner. Minnesota’s front office hasn’t been afraid of being a last-minute suitor, but getting guys acclimate could hold some weight given how the Lance Lynn and Logan Morrison moves ultimately worked out.

When the Padres decided to spring for Snell with a package centered around their second-best pitching prospect, they effectively took themselves out of any discussion regarding another deal. The money is still there for them to target Trevor Bauer, but they don’t seem likely to move Mackenzie Gore or C.J. Abrams, so swapping for another top arm would be difficult. This benefits the Twins as it’s one less club vying for the same prizes.

Given the organization he played for it was probably a near-guarantee that Snell would be moved. I think Chicago still flips Darvish, but Jed Hoyer will want to get his first big move right. Castillo and Gray don’t necessarily need to be shipped out, but Cincinnati appears intent on tearing it down after a one-year run at going for it. Asking Minnesota to be engaged on all of those fronts is hardly a leap.

It’s not yet clear where the Twins will turn, but I’d bet a decent amount that they have plenty of irons in the fire, and it’s clear there’s a decent amount of smoke. Having a better bargaining position than they did yesterday, and also a representative idea of a framework, Falvey and Levine have more clarity now than they may have a few days ago.

Posted by tlschwerz at 7:36 AM