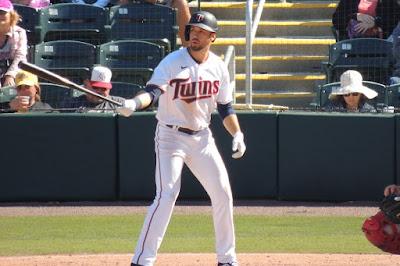 This will be my 6th annual top 15 Twins prospect update. As was the case with the midseason edition back in June, we’re dealing with an unprecedented scenario here. Having not played any minor league baseball action in 2020, movement is based more on what I heard out of the alternate site and what took place from prospects appearing at Target Field.

The hope would be that a level of normalcy is restored in 2021. While I’m optimistic we see something closer to what we’ve come accustomed to, changes are still in store. Major League Baseball booted just over 40 affiliates, and the regular season is still looking like there may be a delay in getting things underway. I’m hopeful that the yearly trip to Fort Myers happens, but that all remains in flux currently.

Here’s where players checked in during previous seasons:

Taking over this spot from Wander Javier, Baddoo has had somewhat of a similar professional trajectory. He’s been hurt plenty and there’s still much more projection than actual results. However, he’ll play 2021 at 22-years-old and has already reached High-A. Growing into his body more and increasing muscle mass, there’s an exciting combination of strength and speed. He needs to begin producing on the field, but the ceiling is one to get excited about.

Celestino is on the 40-man roster and could play in the big leagues right now from a defensive standpoint. It was good for him to be at CHS Field in 2020 and get additional coaching in what could’ve been a lost year. The Twins are still looking for the additional come-up on the Ryan Pressly trade, and it’s this kid that could end up providing it.

The Minnesota native will be 23 when he gets back into a professional game having lost his age-22 season. However, Wallner is an advanced bat that has a plus arm. He’s probably more Trevor Larnach than he is Brent Rooker when it comes to athleticism, and that’s a good thing. Reaching Cedar Rapids in his first pro season was a nice showing, and he could be pushed through the system quickly if everything continues to go according to plan.

On the outside of my top 10 but looking in, I wouldn’t be shocked to see Canterino as a top-5 Twins prospect a year from now. He’s got a great arm and was nothing short of dominant in his first seven professional outings. He’ll be 23 in 2021 and I wouldn’t be shocked if the Twins look to get him extended time at Double-A Wichita. He could be a part of the next wave behind the likes of Balazovic and Duran.

Seeing somewhat of a slip for the Aussie in 2020 was a disappointing reality. Thorpe has always looked like the lefty to bet on in the Twins system, and I really thought he was in for a breakout. Initially dealing with some personal issues during Spring Training, and then fighting ineffectiveness when he was out there, 2020 was as forgettable for Lewis as it was anyone. The talent is all there, and so is the stuff, but it’ll be on him to close the gap between the ears.

I struggled with where to put Sabato as I think what happens and what could go wrong are both pretty straightforward. The former Tar Heel’s bat is beyond legit, but so too is his limit when it comes to impact. He’s never going to move off first base and may ultimately be a designated hitter. There’s less swing and miss than Rooker here, and the floor is probably a bit safer. Without him having played a professional game though, this feels right.

Entirely projection is what you’ve got to go off on Cavaco. He was an extreme helium pick and only got in 20 games before his professional career was put on hold. He’s 19-years-old and will start 2021 at that age. Likely destined to play for the newly designated Low-A Mighty Mussels, Cavaco will have to prove he can stick at shortstop. Playing third base during his prep career, the hope is that the bat develops power, and his 35/4 K/BB was just part of the acclimation process.

If you were waiting on Brent Rooker’s bat to play in the big leagues before believing, the seven-game sample size certainly didn’t do anything to calm your excitement. It was a short debut, but he crushed the baseball, posted a .960 OPS, and launched his first Major League home run. A fractured forearm ended his season, but he’s all systems go and should be looking at an Opening Day roster spot in 2021.

I might be a bit higher on Enlow than most, but I think this is the next Twins pitching prospect to take a big leap. The front office prioritized him in a draft a couple of years ago, and he’s flashed great stuff since. Enlow will be 22 in 2021, but he’s already reached High-A. The strikeouts need to keep rising, but he’s got some electricity to his arm and has done a good job of avoiding substantial damage. Another step forwards and he’ll make another leap on this list.

Like Rooker, Jeffers made his Major League debut in 2020. With Mitch Garver fighting both injury and ineffectiveness the Twins needed to turn to their rising prospect. In 26 games he posted a .791 OPS and did a fine job behind the plate. When drafted the narrative was that the bat would play but uncertainty remained about whether he could hack it behind the plate. Minnesota believed he could, and while that remains a work in progress, a pairing with Garver should give Rocco Baldelli two solid options.

There were a couple of different points that a Duran promotion seemed like a good bet during 2020, but the Twins ultimately never went that direction. He’s got a near triple-digit fastball and I heard plenty of great reports from the people I checked on him with. He probably has a higher ceiling than the pitching prospect ranked higher than him on this list, but the floor is more volatile as well.

For the duration they’ve been in the system together it’s been hard to separate Larnach and Kirilloff. They are virtually the same player with the former having had some college seasoning and the latter having a bit of youth on his side. I’d give Larnach the edge when it comes to athleticism, but both should be seen as advanced bats with unmatched upside especially at the plate.

Hailing from Canada, Balazovic has entrenched himself as the Twins top pitching prospect. He has the right mix of high ceiling ability with a very projectable and safe floor. I’d be pretty shocked if he ends up flaming out and working as a reliever. There may not be ace potential here but expecting him to be a two or three is hardly a lofty expectation.

Minnesota’s top prospect for the past two years drops a spot for me, but only because I think the year without game action leaves some uncertainty. I’ve been bullish on Lewis, and even if he doesn’t stick at shortstop, I think he’s an All-Star caliber talent. While his ceiling is unquestionably higher than Kirilloff’s, there’s also a more volatile floor here. I really wanted to see how Royce would bounce back in 2020, and despite glowing reports from the alternate site, we didn’t get actual evaluation opportunity. I’m not betting against him by any means.

Talk about being thrown into the fire as Kirilloff was asked to make his Major League debut during an elimination game in the Postseason. He could be ticketed for the starting left field role on Opening Day in 2021, and there’s no reason he shouldn’t be expected to at least match Eddie Rosario’s production level. Kirilloff’s bat is the real deal, and while his arm won’t play quite as high, there’s no reason not to get excited about his prognosis as a regular.

Posted by tlschwerz at 9:42 AM