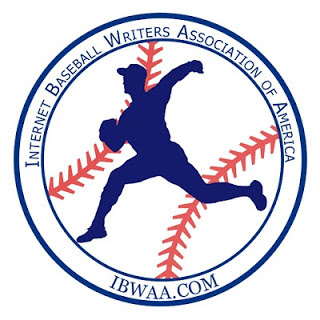 Officially sent out on December 1st, the Internet Baseball Writers Association of America has began accepting 2018 Hall of Fame Ballots. This is now my third year voting, and I'm proud of the privilege to induct players alongside fellow bloggers and other smaller outlets. Linked here, you can find my 2017 ballot as well.

Before diving into the selections, I'd like to lay out a few notations. Both Vladimir Guerrero and Edgar Ramirez have previously been honored, which is why the remain off the current ballot. Despite the ability to vote for up to 15 candidates, I have previously elected to vote just 10. This year, I felt the need to expand that number a bit. Finally, here is my stance on steroids and performance enhancing drugs as they relate to the Hall of Fame.

For players I have voted previously, I will denote them as such with an asterisk. I will also be using the same explanation as the previous vote. With that out of the way, let's get into it.

*Barry Bonds: 164.4 fWARIt's a no brainer. The all-time home run king (762) is arguably the best player to ever step on the field. A seven-time MVP, eight-time Gold Glove winner, and 14-time All Star, Bonds did it all.*Roger Clemens: 133.7 fWARThe Rocket is one of the greatest pitchers to ever grace the mound. He's won seven Cy Young awards, claimed an MVP as a pitcher, and was invited to 11 All Star Games. His 4,672 strikeouts were buoyed by leading the big leagues five separate times.
*Trevor Hoffman: 26.1 fWARAt one point the All-Time saves leader, Hoffman's 601 career saves still rank second, trailing only Mariano Rivera. His career 2.87 ERA was is dazzling, and the seven-time All Star has a place in the Hall.
*Fred McGriff: 56.9 fWARThe Crime Dog spent many of his early season among MVP discussions. Despite never winning won, he finished fourth in 1993. He was elected to five All Star games and won three Silver Slugger awards. It's his 493 career home runs that get him over the top and into the Hall however.*Mike Mussina: 82.2 fWARPitching his entire career in the AL East, Mussina was a household name for Yankees and Orioles fans. Making five All Star games, and winning seven Gold Gloves, Mussina has his fair share of awards. Totaling 270 wins, and just over 2,800 strikeouts, Mussina comes up just short of the guaranteed numbers.*Curt Schilling: 79.7 fWARBloody sock nonsense aside, Schilling is a three time Cy Young runner-up, and six-time All Star. He struck out 3,116 batters in his career and owns a 3.46 ERA while totaling more than 200 wins. Three World Series rings, an MVP, and a 2.23 postseason ERA do him favors as well. Since voting for him last year, Schilling has made plenty of splashes in the media. He's not well liked off the field, but the character clause is among the most dated pieces of inclusion into the Hall of Fame. On baseball merit alone, he's worthy of the nod.
*Larry Walker: 68.7 fWARAlthough he played the field plenty, Walker also turned in a nice run spending time in both the infield and outfield. He was the 1997 NL MVP and made five All Star games. His glove netted him seven Gold Gloves and his bat produced three Silver Slugger awards. Walker finished his 17 seasons with 383 homers and drove in over 1,300 runs.

Jones's 17 year career is often going to be questioned as he held on for five uninspiring seasons to closer out his time as a big leaguer. That aside, the 10 year stretch from 199-2007 was one for the ages. With 10 Gold Glove's and five All Star appearances, he was easily among the greatest in the game for a decade.

An eight-time All Star, MVP and World Series winner, and a batting title to boot, Larry Wayne Jones was among the greatest third basemen to ever field the position. While he falls short of the 500 HR club, and the 3,000 hit club, it's a no-brainer that he deserves enshrinement in Cooperstown.

Vastly under appreciated, Rolen started as a Rookie of the Year winner, and went on to tally eight Gold Glove awards. He was a seven time All Star and among the best to ever field the Hot Corner. With an .855 career OPS, his bat more than does enough to supplement what was an exceptional defensive career.

After suffering injuries and setbacks, it was apparent that Santana's career carried on much after his time had come. That being said, there's an argument to be made that there was no more dominant pitcher for a seven year stretch than what Santana brought to the table. In that time, he owned a 2.88 ERA, racked up 111 wins, and tallied 1,500 strikeouts. Two Cy Young awards were supplemented with four All Star games, three ERA titles, and a Triple Crown. While it wasn't lengthy, calling it anything but astounding would be selling him short.

A five-time All Star and a Silver Slugger Award recipient, Thome's accomplishments are more apparent in the numbers. His 612 career home runs rank 8th all time, and his .956 OPS across 22 seasons is remarkable. A giant for the Phillies and Indians, Home even posted a 1.000+ OPS at the age of 39 with the Minnesota Twins. The slugger should have no problem finding his plaque in Cooperstown.
Posted by tlschwerz at 6:31 PM