Making the Most of Max 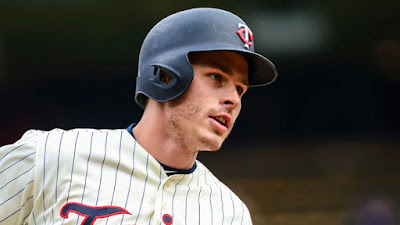 Expecting somewhat of a breakout campaign for Max Kepler in 2018 was a relatively accepted possibility going into last season. When the dust settled, his .727 OPS was the lowest of his career and there was no denying his performance left plenty to be desired. Rectifying the ability to hit left-handed pitchers, he fell off against righties and the offense tanked. 2019 represents new opportunity, and according to at least one project system, there’s some reason to get excited.

Steamer projections have the Twins outfielder pegged for 2.6 fWAR in 2019, a mark that would replicate his 2018 season. Although the result is similar, the path to get there is a new one. A .779 OPS with a .336 OBP is suggested for the German native and those would both be massive boosts to career .730 and .313 marks respectively. So, in other words, the bat arrives.

Last season Kepler’s value was heavily tied to his defensive presence. With Byron Buxton shelved due to ineffectiveness and injury, Max was called to take on a more demanding presence in the outfield. He tallied 390 innings in center after having played 90 total in the two years prior. His 10 DRS and 10.8 UZR both blew previous tallies out of the water, and even the eye test suggested that the mainstay in the Minnesota outfield was a great glove.

I’ve previously discussed some of the reasons that Kepler appeared to be hampered in 2018. He has consistently vocalized a desire to put the ball on the ground, and while his hit profile suggested he was accomplishing lifting the ball more last season, it wasn’t at an optimal level. His launch angle increased, and the hard-hit rate was a career high, but a lack of line drives held him back given the ground ball outputs and failed HR/FB ratio.

On top of how he was putting the ball in play, Kepler shifted his platoon splits drastically year over year. After struggling mightily with lefties in 2017, his .745 OPS was a drastic improvement. Posting an .828 OPS against righties in 2017 kept his head above water, but that mark dipped all the way down to .720 last season. Settling in more of a middle ground would give Rocco Baldelli a greater assurance that Kepler is capable of being deployed daily and expecting a high level of value no matter who is on the bump.

Looking ahead to what Steamer sees of Kepler in the season ahead, it’s hard not to draw loose comparisons to some of the realities Byron Buxton faces. Kepler has elevated his defensive profile to be a real asset on its own and pushing his OPS anywhere near the .800 mark would genuinely elevate him to a star player level. I’ve found myself bullish on Max believing him to be better than the likes of Eddie Rosario going forward, and it’s this all-encompassing ability that would drive that notion. Max doesn’t have to be a world beater at the plate to take the next step, but if a couple of tweaks are made, this is a guy we’re talking about for years to come.

There’s long been a notion that defense doesn’t slump, so maybe the Steamer projections shouldn’t come as a surprise. If Kepler is in fact the second-most valuable Twins player in 2019, I’m not sure that’s anything but positive. Needing a handful of former top prospects to hit on all cylinders this season, Minnesota will be successful as a sum of its greater parts. With the calendar now turned over, Kepler has an opportunity to be the guy everything indicates he’s capable of. Now we wait and see what happens.

Posted by tlschwerz at 8:41 AM