Is Waiting Really a Good Thing for Twins? 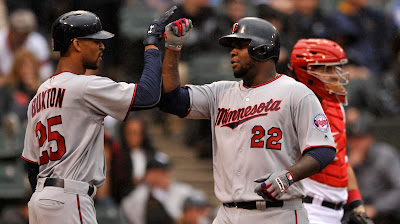 Payroll angst has been at what seems like an all-time high this offseason. Joe Mauer’s contract came off the books, and there’s zero committed dollars for 2020 and beyond. Instead of allocating those funds though, the Twins are hovering around a $100 million payroll and made another “splash” by signing Martin Perez. Local media has suggested the Twins are waiting to get it right, but does that make sense?

Phil Mackey of the recently rebranded Skor North radio tweeted he’s been told directly by someone within the organization that this is a waiting game. Needing to get the “nucleus” of the roster right before adding pieces, the strategy of acquiring filler talent this offseason jives with that notion. Realistically speaking, Byron Buxton and Miguel Sano are going to be the straw that stirs Minnesota’s drink, and even the next wave of prospects won’t change that reality. Waiting for the perfect scenario seems to have plenty of hurdles, however.

Straight from a "well-placed" Twins front office source to me earlier this offseason: "We need to get the nucleus right first. Teams that hit the gas too early wind up mistiming their window. We'll pounce when the time is right." https://t.co/ZulOHchA1d
— Phil Mackey (@PhilMackey) January 18, 2019

There’s no denying that Sano and Buxton have both failed to live up to their prospect projections. Expected to be franchise cornerstones for years to come, neither has solidified that notion yet. Chief among the concerns for new manager Rocco Baldelli, will be jumpstarting and developing both of those guys into the players they’ve been expected to be. If he’s able to accomplish that goal, he’ll have done what former manager Paul Molitor was unable to achieve.

The idea that the spending, supplementation, or bolstering the roster with talent hinges on a set group of players seems like a poor decision, however. First and foremost, baseball is not a sport that’s dictated by even a handful of guys on a 25-man roster. Winning teams accomplish goals by being a stronger sum of their parts and raising the water level of those on the ends of the roster helps to push the bar. On top of that, projecting year-over-year certainties is somewhat of a losing battle.

Recently the Twins sprung up for an 85-win season in 2017 following the disastrous 103 loss campaign a year earlier. Twins Daily’s NickNelson pointed out that neither World Series winning Minnesota club was coming off a season in which competitiveness should’ve been the expectation either. On top of that, there’s plenty of opportunity to be had given the current landscape within the division. Minnesota has the opportunity to play two surefire 90 loss clubs in both Detroit and Kansas City. The White Sox are not yet ready to run, and the Indians have taken considerable steps backwards. Jumping at the window present by the AL Central itself should be enticing on the surface.

Oh yeah, and about those White Sox. Chicago is coming off a 2018 in which they lost 100 games and finished 4th in the division. Boasting one of the best farm systems in the sport, they are in the middle of guys yet to pan out (Yoan Moncada and Reynaldo Lopez), those yet to debut (Eloy Jimenez), and those still a ways off (Nick Madrigal, Luis Robert). Despite all of that, they’ve gone out and signed recruiting tools in Jon Jay and Yonder Alonso, while jumping to the front of the line in hopes of landing a game changing Manny Machado. There couldn’t be a blueprint highlight a less established nucleus than what Chicago currently employs, but they’ve chosen to spark winning by seeing what’s coming and supporting it.

At some point, the Twins need to be held accountable. Holding off on spending in previous seasons while battling uncertainty and a less than ideal opportunity cost was defendable. With more than their fair share of assets available, talent on the rise, and the red carpet nearly rolled out in the division, the sensibility this time around is nowhere to be found.

We can continue to wait for a sign, an omen, or an airplane flying a banner. In the meantime, I guess we just wait for the circumstances to be even more ideal.

Posted by tlschwerz at 9:20 AM