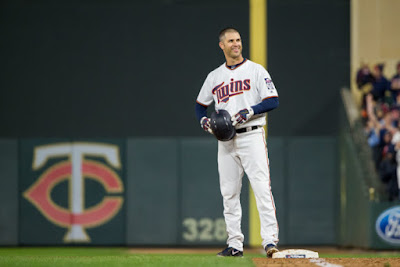 If there’s one thing that the Minnesota Twins have been big on since June of 2001 is Joseph Patrick Mauer. The organization was behind him as the first overall pick, as a three-time batting champion, and MVP, and the recipient of a massive contract extension. At no point since that mid-summer day has the Minnesota Twins not been big on Joe Mauer. In 2019, that trend will continue.

It didn’t take long for the organization to announce that the number 7 would be retired. 35 players donned that digit, with Denny Hocking to be the last wearing it prior to Mauer. Going forward, it will be enshrined among the Twins other untouchable uniforms and the honor will deservedly be placed upon the former catcher.

After announcing his retirement in November 2018, the ball was expected to get rolling on a handful of different glorifying initiatives. The retirement of “7” was a logical first step but has proven to be just one of the first things considered. Today the organization announced that a ceremony will be held to appropriately convey the honor on June 15. To make sure he’s celebrated through the season, a series of five bobbleheads depicting different moments of Joe’s career will be handed out to fans as well.

Through a reorganization of the Target Plaza just outside of Gate 34, the Twins will be adding new entrance points into the stadium. While nothing has been solidified, it’s beyond logical to assume that one of the new gates will be used to commemorate Joe. For a quiet and limelight avoiding superstar like Mauer, a bronze statue is probably a bit much. Given that statues have become a customary addition to the grounds outside the field, it only seems necessary that the latest organization altering retiree find himself among those depicted.

Nothing has been announced in terms of a celebratory patch for Minnesota’s 2019 uniforms, and the on-field product has all but moved on from a player no longer contributing to it. However, if the Twins were to find a way to incorporate a symbol on their uniforms, or in the field of play itself, there’d be no reason for backlash.

In trying to quantify his impact and compare it to the adoration being shown since his decision, the Twins have taken every step in a most perfect direction. The reality is that Mauer had a Puckett or Killebrew-like impact on this ballclub and making sure the sendoff is more than just a simple something in passing was always the right decision.

At the end of the day Mauer will always deal with detractors that can’t wrap their head around him having been underpaid in relation to his value. His impact wasn’t flashy enough to draw the full-throat support of others. Regardless of the irrelevant minority, this long, big, and well-earned sendoff has been everything a Mauer fan could have hoped for.

Around five years from now, a second publicity tour would provide another fun opportunity for Twins fans to adore the Mauer that was.

Posted by tlschwerz at 1:53 PM