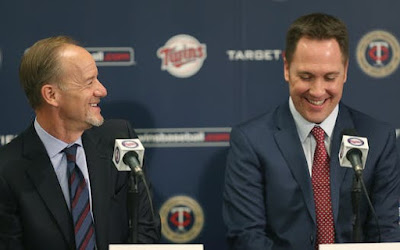 With just over a month until the Minnesota Twins embark upon sunny Fort Myers, the projected Opening Day payroll is just under $97 million. To call that a joke is putting it lightly. That number is $30 million under the 2018 mark, and about $45 million under a realistic expectation given market factors. What’s worth noting however, is that spending doesn’t appear to be as cut and dry as it may seem.

To date, it’s fair to call Minnesota’s offseason a mild success. They’ve gotten better from the point in which they ended the 2018 season, and talent with solid upside has been acquired. There’s no denying this club could use another move or two however, and that reality is what holds them back from any sort of commendations yet this winter. It’s in buying more talent that helps Rocco Baldelli be better positioned for a next step in 2019, but the dollar threshold doesn’t look anything close to doable.

Thinking about what the front office could still choose to do, there’s a couple of names that make plenty of sense. Cody Allen screams probability in the bullpen, and a Gio Gonzalez addition would be great for the rotation. That duo likely comes in around $20 million per season though, and still puts the Twins $10 million under where they were previously. Short of signing Bryce Harper, Manny Machado, or Craig Kimbrel the big fish is not still on the market to raise the overall water level. Dallas Keuchel could command enough to make a seismic shift in the payroll structure, but that may be a move that is more based upon name than performance.

What we’re really seeing here is that short of acquiring the top one to three names on the open market, and avenue to a fair payroll expectation looks murky at best. Minnesota has acquired for free agents this offseason. The club would’ve needed to bring in at least three top tier talents, or something like seven mid-range options to account for the opened cash flow. Allocating dollars to more talent is always a sensible ask, but what seems more problematic is that the market correction on valuations of players simply hasn’t taken shape.

At this stage in the game, we shouldn’t be hearing that one or two teams are debating the validity of Machado or Harper being worth $300 million. Guys are on the market in their early 30’s and are finding one-year pacts below and eight-figure sum. The reality is that baseball gets the most out of talent prior to this portion of a career, and by this time, the market isn’t willing to correct that exploitation.

You can certainly expect a piece from this writer chastising the hometown nine if the payroll is in March where it is now. That number is unacceptable, and opportunity has been left on the table. Even if there’s more potential room for growth executed upon however, it’s hard not to see how organizations would be stretching terms to get towards more realistic compensation numbers.

Across baseball, multiple franchises are worth billions of dollars. At the bottom end of the totem pole (according to this Forbes piece) the Tampa Bay Rays are valued at $900 million. No team has a revenue below $200 million, and only two organizations turned a loss in 2018. What that suggests is those off the field are doing just fine with their investment, while the players responsible for the output are severely underpaid.

We aren’t at a point where the CBA can be rectified, but we also aren’t far off. There’s a storm brewing for the owners, and the MLBPA needs to be vastly more prepared the next time around. For now, it’d be great if the Twins would allocate some of the cash that is currently set to be pocketed, but even from the get-go this winter, their realistic additions would’ve left more to be desired in the hands of those who play the game.

Posted by tlschwerz at 1:58 PM