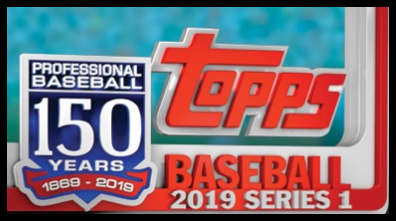 On January 30 the 2019 Major League Baseball season officially gets underway. While the likes of Bryce Harper, Manny Machado, and Craig Kimbrel all remain unsigned and on the free agent market, Topps is ready to role out their first cardboard offering of 2019. Always a fun kickoff to the new year, ripping some wax and seeing new faces in Minnesota uniforms is a time-honored tradition.

In 2018 the exclusive rights owner for production of licensed baseball cards had plenty going for them. While Ronald Acuna, Shohei Ohtani, and Juan Soto wouldn't burst onto the scene until later in the year, the rookie crop was flush with talent. To start off 2019 the same can't be said, but seeing as how guys always bust out of nowhere, card collectors will need to decipher who may be the diamond in the rough for the early part of this season. For the Twins, the first offering is flush with hat tipping content.

The Twins base set to open 2019 is chock full of familiar faces. Logan Morrison is an odd inclusion given that he had his contract option declined quite early in the process. If there's an omission in this group, it's that fellow rookie Stephen Gonsalves has been held back. Outside of those realities, the rest of the group is made up of players either currently playing long term roles or one that was bought out of a final contract year. Kohl Stewart is Minnesota's lone rookie in this cycle.

With the 2019 Flagship product Topps has decided to change up the configuration a bit. Cutting down on the amount of packs, while putting a few more cards in each, those familiar with how this product breaks will be in for a new challenge. The base set becomes tougher to put together, and the inserts no longer fall one per pack. For the hometown nine, inserts are filled with offerings highlighting players like Rod Care, Harmon Killebrew, and Bert Blyleven. Current players do make their way into the subset offerings, and collecting them all will be a much more difficult endeavor this time around.

As with all Topps Flagship product, the hits are hardly the draw. From manufactured relics to sticker autographs, it's more about the parallels and short prints in this set. That said, the hits are where recently retired Joe Mauer really shines. He is the benefactor of multiple manufactured relics, as well as a couple of game-used jersey offerings. Easier than some of the insert cards, the hits will be plentiful when attempting to land one on the secondary market, and there couldn't be a better player for Topps to Target. 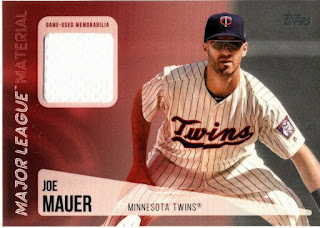 Arguably the most notable chase card of the Twins set is the "In the Name" patch. A staple for the Flaship series, a game-used letter off the back of a jersey is a notable 1/1 piece. The honor has been given to players like Mauer and Max Kepler in recent history, but Jose Berrios takes over for the first time in his career with this checklist. Coming off his first All Star nod, it's definitely an earned honor.

You can pick up 2019 Topps Baseball Series 1 product at your local Target or Walmart, as well as local hobby stores, and an number of online distributors. Boxes range from $20-$90 and carry multiple different pack odds throughout.
Posted by tlschwerz at 8:38 AM