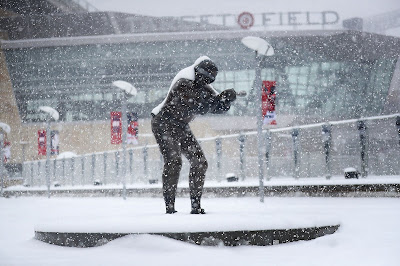 It’s been a while since I’ve fielded some questions and handled a Twins mailbag. With the offseason in full swing, and plenty of irons in the fire, the Minnesota Twins have provided a good deal of questions for fans. Doing my best to pick out a handful of them, here’s my take on some of the discussion.

Are we rumored to sign any position players? I’ve only been watching the pitcher headlines.
— Brandon Peterson (@sotakid89) December 17, 2019

The Twins have been tied to a handful of position players, but really the only role needing to be filled is corner infield. If Sano moves to first base, then the idea of Josh Donaldson makes a ton of sense. Minnesota has suggested they feel comfortable starting Marwin at first, but I feel like that saps a significant amount of his value. Eric Thames, Travis Shaw, or a recently proposed trade including Daniel Murphy could all be in play. Obviously, Alex Avila was inked to slot in behind Mitch Garver.

Do you see the @Twins signing a pitcher in free agency?
— Benjamin Sherry (@BenLSherry) December 17, 2019

I don’t think there’s any question as to whether Minnesota will acquire another pitcher. They only uncertainty is what avenue they’ll choose to go down. Hyun-Jin Ryu is an ideal fit, but he’s about the only “impact” arm left on the open market. They could swing a trade and then decide to sign someone like Julio Teheran as an additional bullet.

Who is the most under that radar prospect that could contribute this year?
— Card Central (@central_card) December 17, 2019

This was part of my piece for the Twins Prospect Handbook, but I did offer it up on Twitter so you can have it again here. If there’s a guy I like to make a Luis Arraez like, out of nowhere impact, it’s Travis Blankenhorn. He was added to the 40-man this offseason, can play everywhere, and is close to big league ready.

Have the Twins given up on Romero as a starter or does he get a look for a spot if they don’t sign someone?
— Andy S (@AndyS_Denver) December 17, 2019

That shipped has probably sailed, he just hasn’t shown the chops to stick in the rotation. Unfortunately, we’re bordering on the time when Romero’s run with the organization ends as well. He’s out of options, so unless he shows well enough this spring to grab a bullpen spot, he’ll likely be claimed off waivers by someone else.

What is a logical return for Eddie Rosario straight up? Do you see us trading Rosario?
— Shea McGinnity (@SheaMcGinnity) December 17, 2019

If you’ve followed me for any amount of time on Twitter you know I’m not high on what Rosario brings to the table. I loved him as a prospect and was onboard a trade for an aggressive promotion schedule. He’s 28 now, has no ability to control the strike zone, plays poor defense, and produces hollow stat lines. Should the Twins be able to deal him, it would be on the premise of another level being unlockable. I don’t think he’s good enough to command much of anything on his own but packaging him with a prospect and dangling Rosario as an MLB-ready piece could have appear for someone.

Syndergaard for Rosario and what package of prospects?
— Brandon (@the10001stLake) December 17, 2019

Funny you should ask; I wrote that exact scenario up at Twins Daily last night. Give it a read here.

My ideal arm from the get-go has been Jon Gray, though I do like German Marquez quite a bit as well. I’d be in on either Chris Sale or David Price if the Red Sox want salary relief.

Do you see Sano having consistent success in the future? Or will he continue to fluctuate between the highs and lows?
— Alex Haugen (@ajhaugen13) December 17, 2019

You won’t find a stauncher supporter of Miguel Sano’s ability that myself. I think you’re guaranteed to get a significant power threat and real home run production if he stays on the field. For all involved, I think the biggest turning point was creating an environment of accountability and buy in. This front office has cultivated a strong infrastructure that no doubt supports its players. Miguel’s problems always stemmed from his level of commitment. We saw buy in last year, and unless he’s willing to throw that away, I’d imagine it remains consistent. He won’t be a perennial All-Star, especially if he crosses the diamond (and eventually moves into the DH role), but a lineup staple seems like a good bet.

I did get a good deal of questions regarding timelines for prospects as well. I do love those, but it’s the subject of my yearly piece for the Twins Prospect Handbook. That will be available in the coming weeks, so you’ll have to check that out there.

Posted by tlschwerz at 9:26 AM