Twins Set Up for a Big Splash 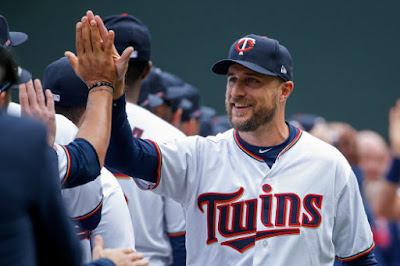 So far, the Minnesota Twins have committed something like $30 million in 2020 contracts to three players this offseason. Two pitchers and a backup catch mean the 26-man roster is quickly closing in on finality. At this point, there’s nothing left but the big bang.

Jake Odorizzi returning to the Twins was a great development. A longer-term deal is probably better than the qualifying offer situation, but it’s negligible nonetheless. Michael Pineda is a guy that made sense to QO, and instead Minnesota’s front office gets him on a two-year deal for less than the one-year tag. Alex Avila replaces Jason Castro as the backup catcher, and he provides a logical platoon partner for star starter Mitch Garver.

Although Odorizzi and Pineda are returning talents, their abilities represent some of the best on the market. Disappointment in the lack of a new name doesn’t hold much weight when the accomplishment of high-quality assets is the goal. Avila isn’t flashy, but it’s a pretty lofty expectation for catcher number two being able to accomplish that. In the moves they've made this front office has gotten the job done and nailed each and every acquisition.

At this point the Twins have something just shy of $100 million committed to 2019. Needing to push the payroll to no less than $135 million, there’s a significant chunk of change yet to be doled out. A reliever and corner infielder seem to still be on the docket, but it’s that key starter still twisting in the wind that has everyone wondering. Maybe it’s Madison Bumgarner or maybe it’s Hyun Jin Ryu, but no matter who it is, a fat check is getting cut.

I still think that the Twins are best served by both paying and trading for starters. The latter isn’t going to jump the bottom line much given the goal should be a level of youth and team control, which generally has a muted price tag. No one has ever gotten more in a free agent deal from Minnesota than Ervin Santana’s 4/$54 million in 2014, but both the total and AAV should be blitzed by in the immediate future.

There has been somewhat of a back to front way about attacking this offseason cycle from Derek Falvey and Thad Levine. They’ve shored up the holes with some of the lesser coveted assets, and now they can focus solely on positioning of the big guns. It seems to be only a matter of time before it happens, but the reality of when and not if has started to sink in.

Expect the Twins to land a player with an AAV of $15-20 million yet, and another $15-20 million split on the final assets to follow. It’s been fun seeing clubs cut checks before Christmas, and just maybe we’ll get back to the days of the Winter Meetings being some sort of exciting frenzy.

We’ll have to wait a bit longer to see how and what all transpires, but the monumental move looks to be on the horizon.

Posted by tlschwerz at 9:12 AM