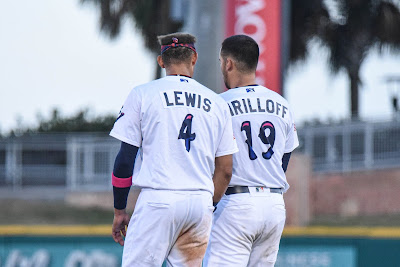 The Winter Meetings in San Diego have come to a close and the Minnesota Twins have all sights set on the 2020 Major League Baseball season. Rocco Baldelli is looking to repeat an extraordinary 2019 performance, and the big-league club looks to remain one of the best in the majors.

As the reigning AL Central Division champions, the Twins now have teams gunning for them, and while the offseason still must incorporate significant talent acquisition, getting contributions from a deep and loaded farm system is something to be expected.

My top 15 prospects were last updated back in June at the midway point of the season; you can find those here. Going back over rankings, here is the full history.

Gordon followed the same narrative he has employed most of his minor league career. Year two at Triple-A was significantly better than the first season, but the ceiling looks relatively muted at this point. He’s a contact hitter with average defensive ability and good speed. There are some question marks on passion, but talent remains enough for him to be a big league regular.

After being taken in the 2nd round of the 2019 draft Canterino quickly established himself in pro ball. He skipped over Elizabethton and turned in five nice starts at Low-A. He’s got strikeout stuff, and while the delivery is somewhat quirky, it showed well in his debut. We’ll need to find out what tweaks are necessary as he rises through the system, but this looks like a middle of the rotation arm.

No one had more anticipation leading up to 2019 than Javier. After missing all the 2018 season, he finally had a clean bill of health. Now with the year in the rear view, it’s hard not to suggest health was the only positive development. Playing 80 games at Cedar Rapids, Javier posted just a .601 OPS and put up a 116/35 K/BB. He’s got all the talent to be a top 20 prospect in baseball, but he needs a turnaround in 2020 badly.

A big arm but drafted for his bat, Wallner showed out in his first year of pro ball. He posted an .813 OPS at Elizabethton and swatted six homers. His time in Cedar Rapids didn’t include gaudy numbers, but it was brief only getting in 12 games. Owning somewhat of a similar profile to fellow prospect Brent Rooker, Wallner should be able to use his athleticism to continue producing at higher levels.

Minnesota grabbed Cavaco with the 13th overall pick and sense him to the GCL. Freshly out of high school, the 18-year-old didn’t get off too much of a hot start. That said, he ascended draft boards due to strong national showings, and his tools all jump off the page. The most important thing that took place for him this year was simply getting engrained into the pro ball schedule.

If there’s something the Twins did at the highest level last year, it was develop catchers. Jeffers took another step forwards behind the dish, and his bat continues to be an asset. He was promoted to Double-A down the stretch and generated an .856 OPS. Possessing true home run power as well as a growing ability as a defender, he’s asserted himself as the best catching prospect in the system.

Things just continue to trend upwards for the Louisiana native. He made it to High-A Fort Myers and posted a 3.38 ERA across 69.1 IP. The hope would be that strikeouts would continue to rise with the walks seeing some decrease. He’s still working on pitching, honing in command, and being able to do more than simply put the ball behind opposing hitters. There’s a ton of talent here and he’s a hard enough worker to harness it all.

Thorpe’s big-league debut came as a contributor to the Twins division title. Although he posted a gaudy 6.18 ERA, it was backed by a 3.47 FIP and was a result of one blow up start against the Indians. He was great in relief and posted a strong 10.1 K/9. He should be still viewed as a starter, but he could be a lefty weapon out of the pen if a change is made. Although he won’t ever be an ace, he looks the part of a certain asset in on the mound.

An MLB debut is probably on the horizon for Duran in 2020 if things go well. He was dominant at High-A Fort Myers and outpitched his 4.86 ERA at Double-A Pensacola. A fireballer with strikeout stuff, this is looking like a very nice return for the Twins from the Eduardo Escobar trade. Duran keeps the ball in the yard and does a decent job limiting walks. Another step up and he could be trending towards a frontline starter.

Somewhat limited by position and age, Rooker continues to rake and make it not matter. He could factor in for the Twins at 1B if the footwork gets in line, but the bat is going to have him up sooner rather than later. He missed the latter half of the season due to injury, but in 65 games at Triple-A Rochester he posted a .933 OPS with 14 dingers. Expect him to start on the farm, but there should be early opportunity for him in the majors.

After a strong pro debut with an .890 OPS over his first 42 games in 2018, the former Beavers outfielder did nothing to calm his steam last season. He made it to Double-A Pensacola and posted the same .842 OPS he had in 84 games with High-A Fort Myers. A power threat homered in his first major league spring training game, Larnach can play all over the outfield and could push for an opportunity with the Twins before 2020 ends.

Maybe no one in baseball ascended more in 2019 than Balazovic did. After being a fringe top 100 prospect, it’s hard to see him anywhere outside the top 50 heading into the upcoming season. He threw 73 innings for Fort Myers and posted a 2.84 ERA. The strikeouts are there, the command is there, and it all resulted in dominance. We’ll see if he’s tested at the next level, but the Canadian is looking like a staff ace.

A three-inning cameo was what Graterol got to call his MLB debut experience. Velocity is his game and that showed as he routinely pumped triple digits. Strikeouts dipped for him at Double-A Pensacola this year, but he was enough of an asset to be used out of the pen on a division winning club. Expect him to go back to starting and be stretch out to begin 2020, but there’s so much to like here. If a third pitch develops, he could be a dominant starter. If it doesn’t, he’ll be a lockdown relief talent.

Missing time to start the year, Kirilloff took a while to get going. It resulted in just a .756 OPS in his first look at the Double-A level, but that shouldn’t cool anything about his trajectory. He’s still a corner outfielder that oozes athleticism and has an advanced approach at the dish. He’s a disciplined hitter with plenty of power, and a quick start in 2020 is going to light a fire under the promotion talk.

Much like Kirilloff, Lewis didn’t get off to a quick start and his bat scuffled all season. He posted just a .661 OPS between Fort Myers and Pensacola, while being questioned as to whether he’d stick at shortstop. Heading to the Arizona Fall League, he took home the MVP trophy and challenged for the batting title after posting a .975 OPS in 22 games. There’s far too much talent to ever write Lewis off regardless of the sample size. This kid still looks like an absolute superstar and getting back in a Blue Wahoos uniform to prove it is likely driving him this winter.

Posted by tlschwerz at 9:37 AM