25 Set To Head North For Twins 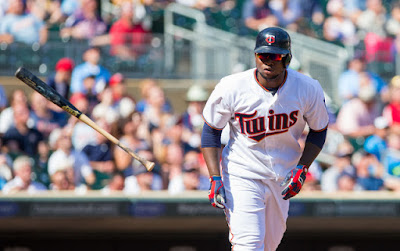 Back in January, prior to the kick off of spring training, I ran through a 25 man roster projection for the 2016 Minnesota Twins. I have long operated under the belief that very few positions were up for grabs, and continue to stick by that. Ricky Nolasco was never a realistic rotation option and Byron Buxton was never headed back to the farm. That puts my positioning from January in a pretty good spot. With that being said, there are still a couple of tweaks I'd like to make.

Now with just a handful of spring training action left, it's fair to suggest that the Twins have all but solidified who will be going north and starting the season with the big league club. Let's take a look at where that puts Paul Molitor's squad.


Santana should be expected to get the Opening Day nod. He finished the 2015 season on a tear, and would have gotten his first Opening Day start in 2015 had it not been for a PED suspension. A rebounding Hughes will follow him, leaving Gibson, Duffey, and Milone to round out the group. I'm extremely high on Gibson this season and expect him to have a very nice year. One of either Duffey or Milone will transition out early as Jose Berrios is going to get his chance sometime in early May.

I have some concern about Duffey replicating his 2015 success. Unless his curve remains incredibly sharp, he'll see some regression. With Milone being out of options, it could be an interesting decision when it comes time to open up a rotation spot.

Starters (9)
No changes here, and nothing unexpected. Minnesota was never going to go away from Buxton on Opening Day unless he had an absolutely abysmal spring. 129 at bats is far from something to tie his numbers to, and the top prospect is going to need to be a difference make for the Twins this season. Park has seemed to acclimate well thus far through spring, and there's no reason his bat won't be present on Molitor's first meaningful lineup card.

Bench (4)
Again, no changes here either. Santana and Arcia have not had a good time at the plate during spring training, but both are out of options. For Santana, the ability to play all over the diamond makes him valuable, and there's still plenty of hope that he can be a serviceable utility player. Really the only potential player to unseat Arcia would be Carlos Quentin. Aside from Arcia being out of options, the Twins also don't have to make a decision on Quentin until June 1, his opt out date. This gives Minnesota a couple of months to see Arcia at the big league level again. For a guy that would undoubtedly be claimed on waivers, there's no reason not to hope the 20 home run production of 2014 returns.

Bullpen (7)
In relief, only one change has been made since the initial roster projection. Alex Meyer failed to grab onto a pen role this spring, and is now headed back to the Triple-A Rochester rotation. In his place, Ryan Pressly takes over after proving to be effective while healthy once again. Unfortunately for the Twins, the misuse of Michael Tonkin a season ago has him in a situation of unknown production, and despite being out of options, his poor spring is probably going to have him passed over. The Twins could have afforded themselves at least one more pen spot in deciding not to offer arbitration to Fien (who's also been bad this spring), but that didn't play out.

At the end of the exhibition schedule, the Twins roster is going to be much as it originally seemed. With the influx of young talent, and already determined veterans, there wasn't much wiggle room for Terry Ryan and Molitor. There's no doubt a handful of fringe guys that will make the initial 25 man, and the development of top prospects so close to the big leagues ensures that lack of production should result in replacement.

A surprise team a season ago, Minnesota shouldn't expect to be taken lightly in the year ahead, and the team has positioned itself to compete. With the regular season just around the corner, the numbers will begin to matter soon.
Posted by tlschwerz at 9:23 AM