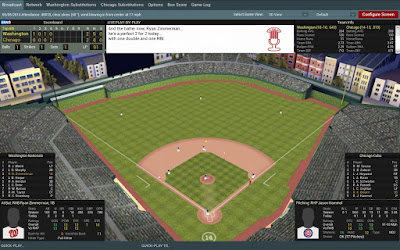 Recently, Out of the Park Baseball 17 launched for PC and Mac. The yearly gold standard in baseball simulators is once again a great time, I reviewed the newest version here. With the review out of the way however, I thought it fun to go hands off and run through a season to see where initial projections from the game see the 2016 version of the Twins.

After hanging around the .500 mark for most of the season, a late year fall marked Minnesota's doom. There was handful of injuries I saw pop up, and when the dust settled, the Twins finished with just a 67-95 record. Of the numbers produced by the simulation of the 2016 season, that record seems to be the one least likely to come to fruition.

Across baseball, OOTP 17 had both the Diamondbacks and Indians finishing with 101 wins. Other division winners included the Orioles (86), Astros (96), Nationals (98), and Cardinals (93). The defending World Series champion Royals finished the season with an 81-81 record.

Looking at the Twins team statistics, there's plenty to be interested in however.

Miguel Sano finished the year with an .841 OPS bolstered by his 28 home runs. Driving in 86 runs, he led the team in RBI as well. Behind Sano in the home run category was Byung Ho Park (24), Brian Dozier (22), and Trevor Plouffe (22). Dozier was also the club's doubles leader posting 40 on the season.

On the pitching side of things, it was Tommy Milone who paced Minnesota in ERA with a 3.94 mark. His 11 wins tied for a team best alongside Kyle Gibson. Only Phil Hughes pitched over 200 innings (204.1) for Minnesota, while Glen Perkins tallied 38 saves for the club. Hughes also led the club with 147 strikeouts, but it was Tyler Duffey's 6.76 per 9 that made up the best ration on the team.

Looking at some of the youth, there were plenty of impressive performers. Alex Meyer posted a 3.51 ERA while notching 153 strikeouts (between AAA and MLB). Jose Berrios tallied a 4.11 ERA mark but pick up 12 total wins on the season. The minor league home run trophy didn't go to Adam Brett Walker (who hit 20 longballs), but instead was handed to Daniel Palka who blasted 35 dingers.

Spending most of the season on the farm, Jorge Polanco's .283 avg, 14 homers, and 61 runs batted in pushed him to be a 4.6 WAR player. Needing an opportunity that didn't come on the big league level, he handled his business in the minors. Down at Cedar Rapids, Lewis Thorpe dazzled to the tune of a 2.92 ERA to go with 170 strikeouts. Other top pitching prospects Kohl Stewart (3.28) and Stephen Gonsalves (3.61) enjoyed nice seasons at their respective levels as well.

It appears, at least as OOTP 17 sees it, that the big league club is still a little ways away. With plenty of pop and talent, things should come together in short order. There's no doubt that the prospects were looked upon fondly however.

Again, check out Off The Baggy's review of Out of the Park Baseball 17 here, and go buy the game today.
Posted by tlschwerz at 8:30 AM